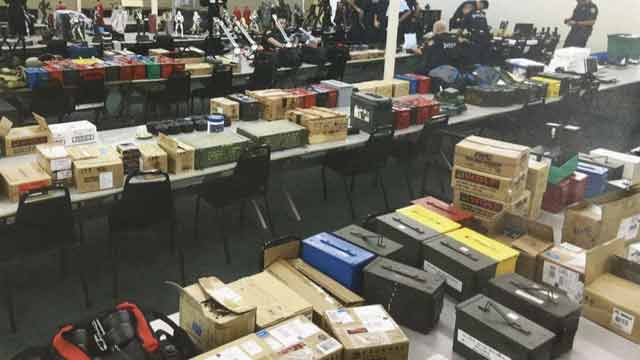 Authorities said ammunition of every caliber was found inside the bunker. (Photo: Harris County District Attorney)

The raid followed a year-long investigation into possible criminal activity at the Paradise Bingo Hall and five other game facilities. Those who ran the business are accused of providing illegal entertainment in the form of gambling machines, which were found in a back room during the raid. Authorities say the betting machines provided cash payouts to winning patrons, which is illegal.

The business, in turn, took the illegally gained money and laundered it through numerous automatic teller machines owned by those who ran the bingo hall. Authorities say some $15 million was laundered over the last four years, but the group’s attorney says the accusations are untrue.

“It’s ridiculous is what it is,” said defense attorney Stephen St. Mark, who also claimed the owners were merely running a legitimate, state-licensed bingo operation.

Authorities also found several safes and what was described as a bunker hidden beneath the bingo hall. Over 100 firearms, thousands of rounds of ammunition, body armor and $87,000 in cash was confiscated from the bunker.

Lt. Ruben Diaz, with the Harris County Sheriff’s Office, said the raid yielded more weapons than he’s ever seen confiscated at one time. Anderson, however, indicated the weapons and other items appeared to have been “something more Doomsdayish,” also noting there were “military-style provisions” made for long-term storage.

Anderson said each firearm will be checked to ensure none of them are stolen or have been used in any crimes. And while authorities did not indicate any of the weapons and equipment found in the bunker were illegal to possess on their own, they were likely purchased with funds that were illegally obtained.

Steven Morris, a regular patron at Paradise Bingo Hall, told KHOU he was shocked to learn of the raid and has never noticed any activities in the business that appeared to be illegal to him.

“It blew my mind when I heard about it,” Morris said.