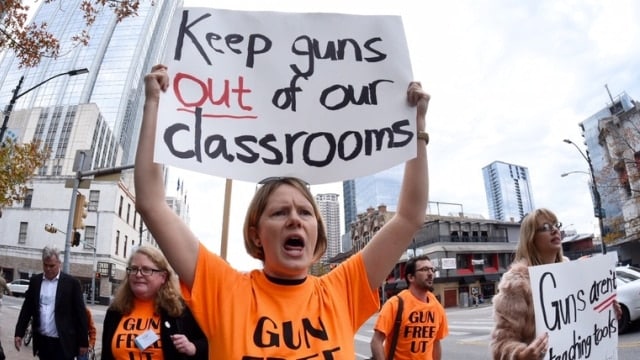 While the court has not heard oral arguments in the case, Judge Yeakel warned the likelihood of the case being successful using the current logic is slim. (Photo: Texas Tribune)

A federal judge on Monday refused to issue a preliminary injunction in the lawsuit by three University of Texas professors who do not want legal concealed carry in their classes.

With the state’s new campus carry law taking effect this month, the professors kept a promise of litigation and filed suit in federal court in July seeking a federal injunction on campus carry naming Texas Attorney General Ken Paxton, UT President Gregory Fenves and members of the school’s Board of Regents in their official capacity, as defendants.

Paxton, in response, filed paperwork in opposition to the professors’ action earlier this month, calling the suit frivolous and the law constitutionally sound.

Now, with classes set to begin for the 2016 Long Session on Wednesday, the court has declined to lend enough merit to the professors’ argument to warrant blocking campus carry while the case unfolds.

“It appears to the court that neither the Texas Legislature nor the Board of Regents has overstepped its legitimate power to determine where a licensed individual may carry a concealed handgun in an academic setting,” wrote U.S. District Judge Earl Leroy Yeakel III, a UT alumni who was appointed to the bench in 2003 by President George W. Bush, in his ruling Monday.

The faculty members, three female liberal arts professors whose classwork sometimes touches on controversial subjects such as abortion and unwanted pregnancies, argue the carry of guns in their classes will chill discussion, thus hindering their right to free speech.

Yeakel, who in 2013 ruled that abortion restrictions enacted by the state of Texas were unconstitutional, didn’t bite on that argument.

“The court has searched the jurisprudence of this country from the ratification of the Constitution forward and has found no precedent for Plaintiffs’ proposition that there is a right of academic freedom so broad that it allows them such autonomous control of their classrooms both physically and academically that their concerns override decisions of the legislature and the governing body of the institution that employs them,” he noted.

While the court has not heard oral arguments in the case, Yeakel warned the likelihood of the case being successful using the current logic is slim.

“Their First Amendment claim is and must be bottomed on their right to speak and teach freely. Neither the Campus Carry Law nor the Campus Carry Policy forbids them from doing so,” he said. “This is fatal to their attempt at this stage in the proceedings to establish a substantial likelihood that their case will succeed on the merits.”

Paxton welcomed the news from the court.

“I am pleased, but not surprised, that the Court denied the request to block Texas’ campus carry law,” he said in a statement issued through his office. “There is simply no legal justification to deny licensed, law-abiding citizens on campus the same measure of personal protection they are entitled to elsewhere in Texas. The right to keep and bear arms is guaranteed for all Americans, including college students, and I will always stand ready to protect that right.”

In speaking with the Texas Tribune, Renea Hicks, the lawyer for the professors, said he was “disappointed” by the decision.

“We’ll just have to pull together more facts for trial and hope things go smoothly on campus in the meantime,” said Hicks. “Sometimes, public policies are so terrible and extreme that it takes the law and courts a little while to catch up.”