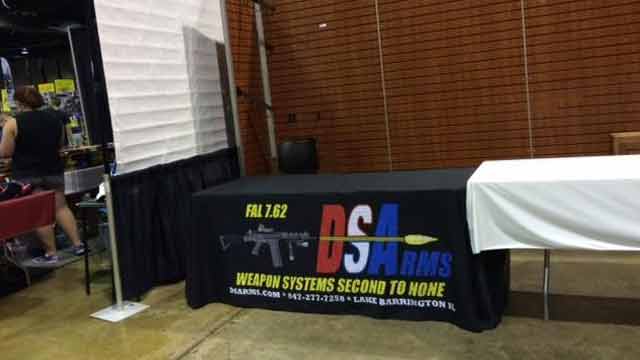 Officials with the Wizard World Comic Con in Chicago made a local gun shop owner take down his display Thursday.

Dave Selvaggio, owner of DS Arms, had plans to attend the Comic Con since March, with prior permission to do so. But apparently somewhere along the way, somebody decided Selvaggio’s plans were no good.

“We want everyone to have a good time at the show,” said Wizard World spokesman Jerry Milani. ”We want this to be fun,” he added, declining to comment on whether the decision to kick out Selvaggio was based on false rumors that his display would include real guns.

Selvaggio’s table was supposed to have replica guns, as well as information on gun classes and safety. At least a portion of the tens of thousands of attendees may have been interested in what Selvaggio was ready to offer.

“Maybe 90 percent of people walking around in costumes have (presumably fake) firearms,” noted Selvaggio. ”All of these movies are filmed with live guns, with firing devices and with replicas.”

In fact, Selvaggio said his company provides a number of replica firearms for films, but the Wizard World staff wasn’t impressed. Selvaggio was told to take down his display just 90 minutes after it was put up.

Moving forward, Selvaggio said he plans to attend the Dragon Con in Atlanta next month, where hopefully he won’t be given the boot.