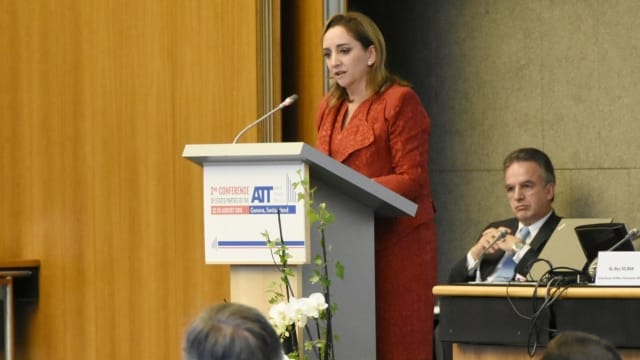 While speaking at a UN meeting in Switzerland, Mexico’s Foreign Minister said it was as easy to buy a gun in the U.S. as it is to purchase a “liter of milk or a box cereal.”

Foreign Minister Claudia Ruiz Massieu made the remarks to the Second Conference of States Parties to the Arms Trade Treaty of the United Nations in Geneva on Monday. She advocated for greater controls by each government on the transfer of arms as well as increased accountability.

In her speech, she held that Mexico is a peaceful nation committed to an effective, realistic and sensible arms trade regulation, holding that weapons for private use are strictly regulated and need a special permit from authorities to possess.

“But these efforts are limited by the thousands of illegal weapons who come every year to our country from our northern border where the largest producer and exporter is,” she said, without naming the United States directly.

Removing ambiguity, she went on to state that there are 23,000 licensed gun dealers in U.S. border states, contending that guns can be bought at “fairs, online and even in major supermarkets in the country,” and that it is “so easy to acquire weapons as is buying a liter of milk or a box cereal.”

Massieu went on to state that between December 2012 and July 2016 Mexican authorities seized 40,000 guns, 4,000 grenades and 5.6 million rounds of ammunition and argued that in tracing some 70 percent originated in the U.S.

She blamed the demise of the U.S. federal assault weapon ban in 2004 in large part for Mexico’s gun violence problems, saying the availability of formerly banned firearms in the States “gives transnational criminal organizations enormous firepower” that has an effect on both sides of the border.

“In this regard, Mexico welcomes the tenacious and sincere efforts of President Barack Obama to establish administrative measures to strengthen controls on the possession and sale of weapons,” stated Massieu.

Her statements echo a similar request made July 14 before the General Assembly of the Organization of American States, when she publicly asked the U.S. Congress to hold “a frank, constructive discussion and a regional vision on the ban on the sale of assault weapons.”

Politically, Massieu is aligned with the Institutional Revolutionary Party (PRI), President Peña Nieto’s party, and she came to the post after a stint as Secretary of Tourism. Her father, José Francisco Ruiz Massieu, was the long-time governor of the state of Guerrero and a PRI leader before he was assassinated in a hit paid for by a political rival.

As for the figures mentioned by Massieu in her speech, earlier this year a U.S. Government Accountability Office report, requested by New York Democrat U.S. Rep. Eliot L. Engel, delved into the 104,850 firearms seized by Mexican authorities and submitted for tracing by the ATF from 2009 to 2014. Of that figure, 73,684, or 70 percent, were found to have originated in the United States.

The report went on to explain most were purchased legally and about 41 percent came originally from Texas gun shops. However, it should be noted the Swiss-based Small Arms Survey put the blame on illegal weapon imports into the country on a mix of foreign gangs, Asian sources, local illegal production, and guns coming over the U.S. border. The group estimated there were upwards of 10 million unregistered guns in private hands in the country.

In contrast to the ability to legally purchase guns in Mexico when compared to the U.S., the country of 120 million has a single gun store with a limited selection, and is managed by the Army. As noted by the Washington Post earlier this month, the store’s volume has increased from 549 guns sold in 2000 to 10,115 last year as crime escalates in the country.