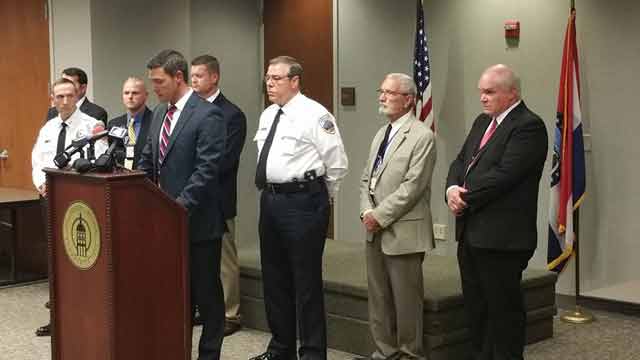 Officials announce the arrest of Pamela Hupp, who was charged with first-degree murder for a shooting she originally claimed was self-defense. (Photo: O’Fallon Police Department)

A woman who said she fatally shot a man in self-defense inside her O’Fallon, Missouri, home last week was charged with murder Tuesday after an investigation revealed the man was actually a pawn in the woman’s bizarre plot aimed at taking heat off of her for a high-profile 2011 murder case.

Pamela Hupp, 57, placed a 911 call just after noon on Aug. 16. Hupp said there was a man trying to break into her house in what she described as an apparent burglary. Before police arrived on the scene, Hupp placed another call to 911 and informed the dispatcher that the man had successfully gained entry into her home and she shot him.

When officers arrived, they found a deceased male inside Hupp’s home and determined he had been shot multiple times with a revolver. He was later identified as 33-year-old Louis Gumpenberger and the initial investigation indicated Hupp and Gumpenberger were not previously acquainted and had no known connection.

St. Charles County Prosecuting Attorney Tim Lohmar said in a press conference that investigators found a hand-written note, along with $900 in cash, double bagged in Ziploc bags in each of Gumpenberger’s pockets. The notes gave instructions for kidnapping Hupp, collecting money, then killing Hupp, after such time a sum of $10,000 would be paid presumably to Gumpenberger.

According to Hupp’s account of the events leading up to Gumpenberger’s death, she was sitting inside her vehicle, which was parked in her driveway, when a silver four-door sedan quickly pulled up to her house. Gumpenberger then got out of the sedan, which sped away, and he entered her vehicle through the front passenger side, she said.

Hupp said during the confrontation in the car Gumpenberger kept looking back over his shoulder and at one point, as he looked back, Hupp slapped his arm, knocking the knife out of his hand, which gave her a chance to break free.

Hupp then ran to her house and through the garage door, she said, but Gumpenberger followed her, yelling at her the entire time and threatening to kill her. She was able to get inside, where she was able to place the call to 911, but was adamant to the dispatcher that she did not feel she could keep the man outside of her home.

After placing the 911 call, Hupp ran into the master bedroom to retrieve a revolver from a nightstand. Shortly thereafter, Gumpenberger made his way into the home, according to her account, and as he came at her, toward the bedroom door, she fired the revolver until it was empty, striking him several times.

Police arrived a short time after Hupp placed the last 911 call and the investigation began. Along with the notes found in Gumpenberger’s pockets, a knife was recovered from inside Hupp’s vehicle.

But as the investigation went on, Lohmar said there began to turn up more questions than answers.

At the forefront was the fact that while Hupp repeatedly said she did not know anyone by the name of Russ, she not only knew of a man named Russell Faria, but was a key witness against him in a murder trial. Faria was accused of the brutal stabbing death of his wife, Betsy. While Hupp’s testimony originally helped to convict Faria, he was acquitted last year on account of new evidence.

Faria, who apparently collected a large life insurance payout, has maintained Hupp’s possible involvement in his wife’s murder, noting that she was the last one to see her alive.

However, Lohmar said extensive investigating initially failed to produce any connections between Gumpenberger and Faria or Gumpenberger and Hupp, but as investigators probed deeper, they discovered a four-minute window in which Hupp and Gumpenberger may have met less than an hour before the shooting occurred.

Based on the information obtained from Google, authorities determined Hupp was at the apartment from 11:25 a.m. to 11:29 a.m., but do not know what exactly happened during that time.

Thirty-five minutes after the encounter at Gumpenberger’s apartment, Hupp placed the first call to 911, some 13 miles from the apartment.

Gumpenberger’s mother told authorities he was involved in a car accident in 2005 which resulted in a traumatic brain injury that caused slurred speech, as well as numerous physical and mental impairments. She said her son did not drive, that she would take him to his doctor’s appointments, but he otherwise walked everywhere he went.

Authorities are still unsure how Gumpenberger made the 13-mile trek in half an hour, but the silver four-door sedan described by Hupp likely never existed.

Furthermore, officials indicated that the actions played out at the time of the shooting appeared to have been a premeditated plan based on a previously scripted 911 call.

In fact, investigators also learned that Hupp contacted a woman six days prior to the shooting in an attempt to have her record what Hupp claimed was a 911 call for the television show “Dateline.” The woman said she was outside of her St. Charles home when a female pulled up in a dark-colored SUV, said she was a producer for “Dateline” and working on a show about 911 calls. The driver of the SUV offered the woman $1,000 upfront and another $1,000 after she recorded a sound bite for a scripted 911 call. The woman initially agreed, but after the driver failed to produce any credentials proving she was who she claimed to be, the woman backed out and returned home.

However, outside of the woman’s home were security cameras that captured the encounter. Video revealed the SUV was the same make and model of Hupp’s vehicle, with a license plate number also matching Hupp’s. The woman later picked Hupp out of a lineup, identifying her as the woman who posed as the television producer.

With additional details of the case not yet made public, Lohmar said they were “very confident” with the amount of evidence they had against Hupp to move forward with the charges, although they still do not exactly have a clear motive.

“The evidence seems to indicate that she hatched a plot to find an innocent victim and to murder this innocent victim in an apparent effort to frame somebody else,” Lohmar told somewhat confused reporters of the complex case during a press conference. Lohmar did not say who Hupp was trying to frame.

Lohmar said they believed Hupp was “very calculated in looking for someone who fit a particular profile,” when she encountered Gumpenberger. He also added that they did not believe Gumpenberger was the one who placed the notes and cash in his pockets and that they were “confident” they knew where the knife found in Hupp’s car came from.

O’Fallon Police Chief Roy Joachimstaler interjected that he believed the plot was an attempt to “take the heat off” of Hupp, making it clear that the belief was his own opinion, not necessarily that of the department.

Lohmar praised the O’Fallon Police Department for what he called – although an extremely complex case – an “outstanding investigation.”

Hupp was arrested after she left her home Tuesday morning. She was charged with first-degree murder and armed criminal action, with a bond set at $2 million, cash only. But before the booking process was completed, the case took another turn.

Joachimstaler said while she was being booked into the jail, Hupp asked if she could use the restroom. While inside the restroom, Hupp, who had apparently sneaked a ballpoint pen past security, used the pen to repeatedly stab herself in her neck and wrists. A female officer interrupted Hupp’s actions, secured the scene and rendered first aid until medical personnel arrived. Hupp was taken to the hospital, where she was listed in stable condition as of Tuesday evening.