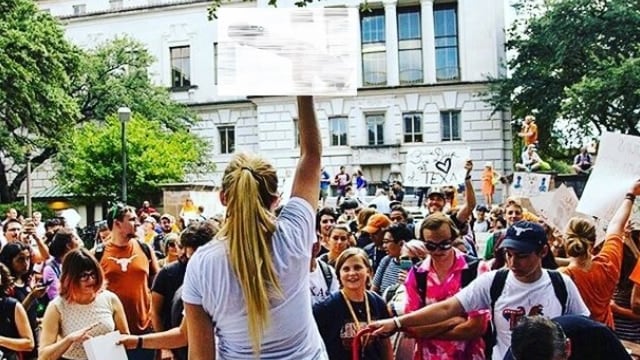 The Cocks Not Glocks rally at UT went off about as expected, though with a smaller crowd than what social media promised. (Photo: Instagram)

The number of donated adult entertainment devices outnumbered attendees at the Cocks Not Glocks rally against campus carry at the University of Texas on Wednesday.

The crowd was described as “several hundred” which by any account falls a skosh short of the 10K people who signed up as “attending the event” on Facebook.

The event, which has been planned for months and promised to be the largest anti-gun rally in Texas history was built on the basis of absurdity in an effort to chastise the concept of lawful concealed carry on campus, which went into effect on Aug. 24 at the start of the Long Session.

By all accounts, the event was peaceful and campus officials felt there was no need for increased police presence.

“I don’t want to minimize the creative nature of this protest but it’s not unusual for us to have a student protest on subjects that are highly charged,” John Bird, director of media outreach for the university, told mySA.com.

“You can’t hurt anybody with this,” one student said, referring to the sex toy, “so why is it illegal to carry this, but legal to carry a deadly weapon?”

Of course, it should be pointed out that “dildocide” both intentional and accidental, is a very real thing and has shattered lives.

As reported by the Houston Chronicle, Students for Concealed Carry welcomed the demonstration and boasted that freedom of speech and gun rights could coexist on campus, even launching a line of merch to capitalize on the event themselves.

“We fully support the Cocks Not Glocks protest. The argument against campus carry and the right to self-defense has just as much of a right to symbolic protest as we do in a manner that they see fit, regardless of anyone’s opinion about the vulgarity or efficacy of said protest,” said Grisham.

He did say the dick joke argument is getting worn out, though.