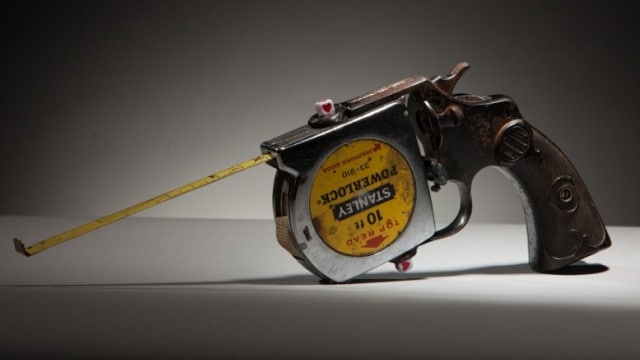 “Taperuler Gun” by Luis Cruz Azaceta, part of the Guns in the Hands of Artists program which will be collecting unwanted firearms in Minneapolis this weekend. (Photo: Jonathan Ferrara Gallery)

The City of Minneapolis is partnering with Pillsbury United Communities to fund two gun buybacks this weekend with the aim to convert weapons into art objects.

Set for August 27, the buybacks will occur at two area firehouses– Station 14 in north Minneapolis and Station 17 in south Minneapolis– and offer those with unwanted firearms $25 to $300 Visa gift cards, depending on the type of gun they turn in.

The event is the second one of its kind put on by PUC.

“There are too many Minnesotans losing their lives to street violence, suicide, domestic violence and accidental shootings,” said Chanda Smith Baker, president and CEO of the group, in a statement. “We are unwilling to look the other way, believing that there’s nothing we can do—but rather we will continue to do our part to make our community safer. We have a public health crisis with gun violence. It affects all of us, and we all must be part of the solution.”

The group, a nonprofit organization that evolved from a settlement house established by bakers John and Charles Pillsbury, whose company is today owned by Minneapolis-based General Mills, has ventured into the gun control realm in recent years.

Besides their past association with Guns in the Hands of Artists program which produced a number of art objects from firearms acquired in previous buybacks, Chanda Smith Baker is a founding member of the Minnesota Coalition for Common Sense.

Former U.S. Rep. Gabby Giffords and her husband, astronaut Capt. Mark Kelly, formed the group in February with a goal to expand background checks to include most private gun transfers and increase reporting of mental health records by the state to the Federal Bureau of Investigation’s National Instant Criminal Background Check System.

Giffords toured the opening of Guns In The Hands of Artists at Pillsbury House Theater in Minneapolis in May when it debuted.

“As someone who lost a cousin to gun violence, I am acutely aware of the emotional toll and the rippling impact it has on family and friends,” said Smith Baker. “This issue is personal for me, and unfortunately it is personal for many across our community.”

Firearms turned in will be cleared by the Minneapolis Police Department and then forwarded to the Art is My Weapon program who is actively seeking artists to contribute to the project.

Gun rights advocates classify the buy back as an exercise in feel good solutions.

“This is a pretty typical case of gun banners duping well-meaning donors into mistaking movement for progress,” Andrew Rothman,  president of the Minnesota-based Gun Owners Civil Rights Alliance told Guns.com on Thursday. “The urge to ‘do something’ is so strong that the charity is ignoring the fact that gun buybacks are proven to be ineffective in reducing criminal violence.”

Further, Rothman advised that many gun enthusiasts see opportunity in such events.

“On the other hand, many law-abiding gun owners in the Minneapolis area–including me– are happy for the two opportunities: one, to turn old, cheap, broken or otherwise unwanted guns into cash to purchase newer and better guns, and two, the opportunity to visit the areas near the buyback to perhaps find a bargain and rescue a quality firearm from being destroyed,” said Rothman.