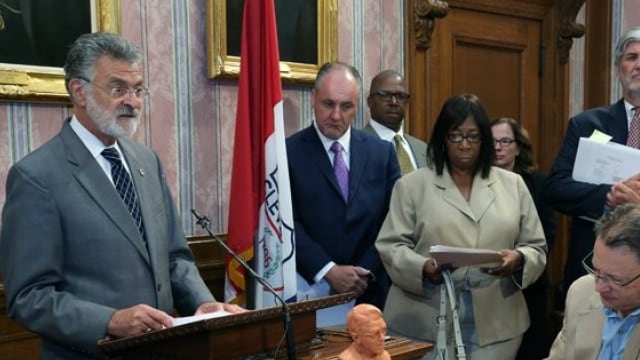 Though a judge booted several of the city’s new gun laws, Cleveland Mayor Frank Jackson, left, took the ruling as a win since it upheld the city’s controversial gun registry. (Photo: City of Cleveland)

In a mixed ruling, a county court this week axed several of Cleveland’s expansive gun ordinances adopted last year while upholding others.

The action, filed last April in Cuyahoga County Common Pleas Court, sought to block implementation of a package of gun control laws that included mandates for gun owners to report private gun sales as well as guns lost or stolen to local authorities and compelled firearms offenders living within the Ohio city’s limits to register their place of residence and other personal information.

Ohioans For Concealed Carry filed suit against the City of Cleveland arguing violations of state preemption laws, citing a 2010 case decided in the Ohio Supreme Court that cities could not pass gun laws in excess of those maintained by the state.

The first found the city’s definition of “automatic firearm” to include semi-autos capable of firing more than 31 rounds without reloading to be unconstitutional. The second held the city’s law that no person could fire a gun within 500 feet of any park, playground or recreation center owned by the city was invalid as exceeding state law. On a third point, Strickland-Saffold ruled Cleveland’s seizure and confiscation ordinance allowing police to collect weapons from those suspected of drinking or threatening a disturbance violated state carry laws.

Finally, the court held an ordinance changing the penalty for defacing a firearm from what the state allows was unconstitutional.

The city’s gun control package has been unpopular since it was adopted, leading to protests by Second Amendment groups and the National Shooting Sports Foundation to rule Cleveland out as a host location for a future summit.

While there were some wins for gun rights advocates, there were also some important setbacks.

Strickland-Saffold upheld the city’s gun lock law, requirements that all firearms found on school property be reported to the police, the reporting of private gun sales, a mandate to report lost or stolen guns, and the controversial gun offender registry itself.

The registry, which had little to no compliance when introduced, was blasted by local investigative reports earlier this year as almost impossible to navigate.

Still, the carry group who sued is taking the ruling as a win, while vowing to keep fighting.

“We warned Cleveland when they first considered these ordinances that we’d be challenging them in court and that some of these were blatantly unconstitutional,” noted Ohioans For Concealed Carry in a statement. “Still, the anti-gun city administration got cover from the court on several of their ridiculous anti-freedom planks. OFCC is meeting with its legal team to consider the possibility of elevating these issues to the 8th District Court of Appeals.”

Cleveland Mayor Frank Jackson is also counting this week’s ruling as a victory.

“The city of Cleveland is pleased that the Cuyahoga County Court has upheld many provisions of the city’s recently enacted gun weapon gun offender registry,” Jackson said in a statement. “As we continue to combat gun violence in our city, it is crucial law enforcement has the regulatory authority needed to keep guns off the streets and out of the hands of criminals.”