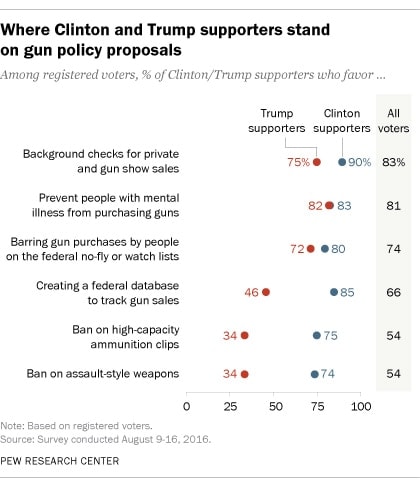 Most supporters from both Donald Trump and Hillary Clinton camps favor expanding background checks to include private gun sales and at gun shows, but express different thoughts about where gun control ranks as a priority, according to a national poll by Pew Research published Friday.

The survey sought to gauge views on gun control policies from supporters from members of both parties and how it has changed from past presidential election cycles. Answers were collected Aug. 9-16 from 2,010 people.

Revealing a polarization in views, 79 percent of Clinton supporters said they favor gun control whereas 9 percent of Trump supporters thought the same.

During both parties’ conventions earlier this summer, Republicans had little to nothing to say about guns — even with leadership from the National Rifle Association speaking — whereas Democrats made gun control a centerpiece of their agenda.

Expanded background checks drew support from 75 percent of Trump supporters and 90 percent of Clinton supporters; preventing people with mental illness from buying guns gained 82 and 83 percent; and barring those on federal terror watchlists gained 72 and 80 percent.

Sixty-eight percent of Republicans favored the creation of a federal database to track gun sales, 52 percent on banning assault weapons, and 50 percent on a high capacity magazine ban.

Trump’s platform does not fully reflect the views of his supporters shown in Pew’s results. Trump says the current federal background check system needs to be improved with better record keeping rather than expanding checks.

Clinton’s platform, on the other hand, aligns with the majority of her supporters. She says she supports sweeping gun control measures, reinstalling previous measures like an assault weapons ban, and completely reforming the current systems in place.