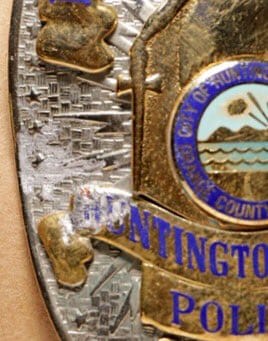 Police posted a picture to Twitter of the officer’s badge illustrating the impact zone from the bullet. (Photo: Orange County Sheriff’s Department.)

A California police officer is lucky to be alive after a bullet heading for his heart hit his badge during a gun battle that erupted early Friday.

The altercation began after Huntington Beach police were called to investigate a domestic violence dispute around midnight. A man fled the scene speeding off in his car as police arrived. The suspect drove for a few miles until he made a sudden u-turn and fired at police. One officer was struck by a bullet during the encounter.

Unaware that he’d been hit, the officer and another patrol car continued the pursuit until California Highway Patrol intervened. The suspect continued driving for 70 miles until he lost control of the vehicle. The car crashed down an embankment and burst into flames. The driver was pronounced dead at the scene.

Marlatt said the officer who was struck was taken to a hospital to be checked out. He suffered only minor cuts from windshield glass. According to Police Chief Robert Handy the badge took the impact of the bullet ultimately saving the officer’s life.

Placement of badges can vary depending on the position of an officer’s bulletproof vest and body shape and size. In this case, the officer’s badge was on the edge of his vest covering the flesh unprotected by the body armor.

California Highway Patrol Officer Steve Carapia told the local NBC station that police put on a badge to protect but never imagine it would do the protecting.

“We work so hard for that badge, we sacrifice many hours…. never imagining that our badge is going to save our life,” commented Carapia.