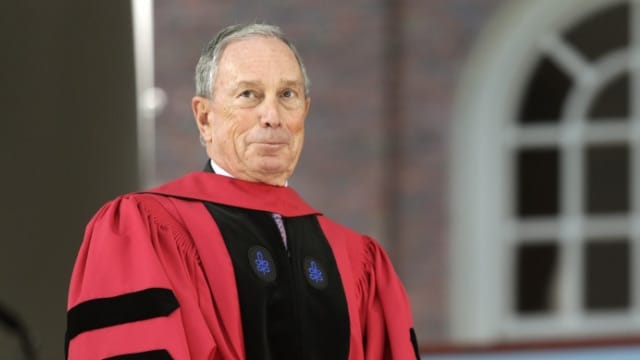 The co-founder of Mayors Against Illegal Guns announced last week that his charity is establishing a new program to provide training for mayors across the nation.

Then-New York Mayor Michael Bloomberg and Boston’s Thomas Menino launched the gun control group in 2006 and saw it grow to some 1,000 members from coast to coast. The group was merged with Moms Demand Action to form Everytown in 2014 and funded by a $50 million influx from Bloomberg himself — a month before he gave Harvard’s commencement speech.

Now, Bloomberg is dropping $32 million in a project through the university to establish the Bloomberg Harvard City Leadership Initiative.

“More and more, cities sit on the front lines of our most pressing issues, from climate change to public health to terrorism,” noted Bloomberg and Harvard President Drew Faust in a joint opinion piece in the Boston Globe. “As we look to cities to take on those challenges, we believe this initiative will help drive needed change from the bottom up.”

The two argue that running a city is a complex endeavor, and local strategy can be molded to make a city run smoothly.

“Issues that people care deeply about — their safety, their job prospects, their health, their schools, and their pocketbooks — are often shaped largely by local policies. As more and more people around the world live in cities — nearly two in three Americans already do — how well cities are run will affect the future of the planet in profound ways,” reads the op-ed.

Under the auspices of the program, 300 mayors and 400 top mayoral aides will take part in the initiative’s executive training programs that will be crafted with the Harvard Business School and the Harvard Kennedy School. The training will be delivered through virtual classes as well as an on-demand system which participants can utilize for policy research. Summer internships for Harvard students will also be funded in mayors’ offices while executive coaching by more experienced mayors to new city leaders will be offered as well.

While a list of the mayors and participating aides was not made available, the university noted they will tap into “Bloomberg Philanthropies’ global network and experience in more than 200 cities.”

While the initiative is not avowedly focused on gun violence, there are numerous ties between Bloomberg and Harvard that home in on gun policy.

The Harvard Kenny School hosts a Gun Policy Summit put on by the Johns Hopkins Bloomberg School of Public Health on making gun laws enforceable. A senior research fellow and head of the school’s program in criminal justice came to Harvard with a glowing recommendation from his time in Bloomberg’s New York City administration. Hopkins earlier this year released a survey that suggests most Americans support smart gun that included work from Harvard researchers and was paid for by a grant from the New Venture Fund, which receives money from Bloomberg Philanthropies.

Harvard has in the past year conducted several studies that have strengthened the case for increasing background checks on private gun transfers, that the number of women who own guns is inflated, that guns not crime are responsible for police deaths, and that defensive gun use was not associated with reduction of injuries during a crime. Well advertised by the Trace, a Bloomberg journalism start-up focused on the national gun conversation, many of these concepts have been espoused by the various gun control groups associated with the former mayor.

“Over the past several years, Bloomberg Philanthropies has created a number of programs that are designed to spur and support innovation by local governments, while Harvard’s Kennedy School of Government and Business School have long set the standard for integrating real-world lessons into their curriculum,” noted the Bloomberg and Faust. “Now, we aim to use our collective experience, expertise, and resources to create the most ambitious executive education program ever designed for mayors and city leaders.”