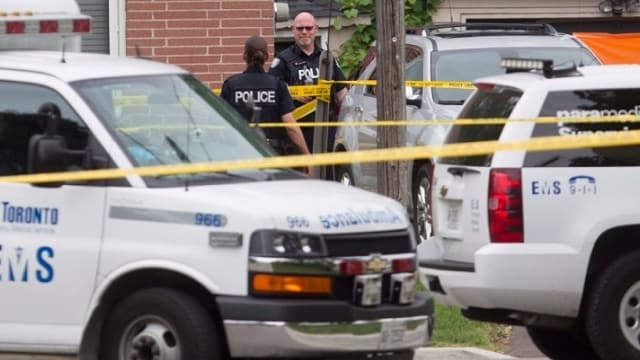 Three people were bolted to death in a house in Scarborough, Ont. last Thursday, by a man who was arrested in 2008 for robbing banks while disguised. (Photo: Chris Young/The Canadian Press)

Toronoto’s Scarborough suburb on the East End was the scene last week of an apparent crossbow attack that left three dead.

Brett Ryan, 35, has been charged with three counts of first-degree murder of two men and a woman who were killed last Thursday. CTV News reported that at least two victims were hit by a crossbow bolt and a crossbow was found nearby. A fourth person was injured.

Some questioned how such a murder could be carried out, as crossbows aren’t exactly a rapid fire weapon despite what shows like The Walking Dead would have the public believe.

“This is quite the procedure, even if you had a cocking aid,” said Kathleen Millar, former technical and executive director of Archery Canada, about reloading a crossbow. “You have to lean over, pull it up — it’s quite an onerous task … it takes quite a few seconds to get it set up in order to just cock it, and then put the bolt into the bow.”

As noted by the Guardian, Ryan was arrested in 2008 in connection to a string of bank robberies in Toronto and the nearby Durham area, in which he wore a fake beard.

Ryan has been remanded to custody until at least September 2 and authorities caution the investigation is in its infancy.