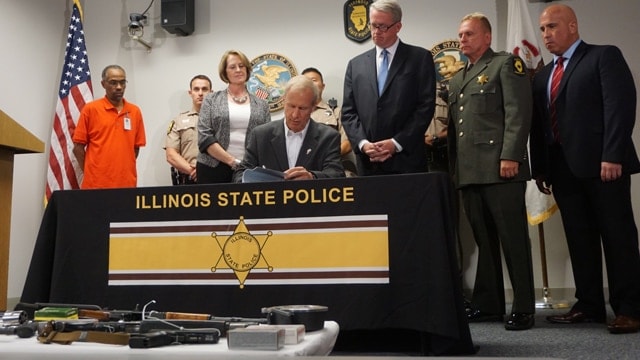 The new Firearms Trafficking law makes it a felony for a person without a state firearm owner identification card to bring guns into Illinois with the intention of selling or delivering them, the governor’s office said in a statement.

The measure will also give a stiffer punishment for anyone previously convicted of unlawful use or delivery of a firearm, gunrunning or firearm trafficking.

“We must stand up and help our kids and our communities find safety from violence,” Rauner said when he signed the bill. “Children are often in the crossfire. They’re vulnerable and impressionable. They deserve to see better things in the world. They deserve to feel safe in their own homes.”

Rauner was joined by state leaders who sponsored the bill at the Illinois State Police’s crime lab in Chicago last Tuesday.

“Each weekend in Chicago is bloodier than the last,” said House Republican Leader Jim Durkin (R-Western Springs) and he added there have been 425 people murdered by firearms in Chicago so far this year and another 2,320 injured.

Laws before were focused on holding the shooter accountable, but not the person who armed the shooter, Durkin said, adding that 60 percent of the guns used to commit crimes in Chicago were bought out of state.

“This law targets straw purchasers – those who skirt Illinois firearm laws by buying guns in other states with the intent to resell in the illegal black markets of Illinois,” Durkin said.

Durkin sponsored the measure after the Cook County State Attorney’s Office brought it to his office. With bipartisan support, the measure was sent to the governor’s desk in June.