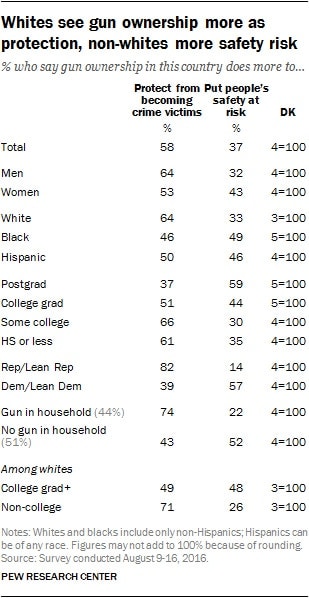 A recent survey by Pew Research shows a higher percentage of gun owners and support for firearms as a means for protection, but also the majority supporting gun control policies like expanded background checks and ban on assault weapons.

Of those interviewed for the survey, the percent of people saying they have a gun inside their home was up by almost 4 percentage points and the same increase goes for those who think owning a gun will protect them from crime.

Forty-four percent, or 881 of the 2,010 respondents, told Pew they have a gun inside their home, and 58 percent said they see it as a means of protection.

Pew’s results for gun ownership are within range of results by similar surveying companies asking the question. A survey published in July by Quinnipiac University, which also showed Americans having strong yet conflicting feelings about guns, revealed 45 percent of respondents saying they had a gun in their home; a CBS News poll published in June had 36 percent; and a CNN poll from January showed 40 percent.

Yet, many point to the General Social Survey because of its massive dataset and detailed questionnaire for an accurate reflection of American views. Its most recent study showed gun ownership dropping from 47.6 percent in 1974 to 32.4 percent in 2014.

Expanded background checks drew support from 75 percent of Trump supporters and 90 percent of Clinton supporters; preventing people with mental illness from buying guns gained 82 and 83 percent; and barring those on federal terror watchlists gained 72 and 80 percent.