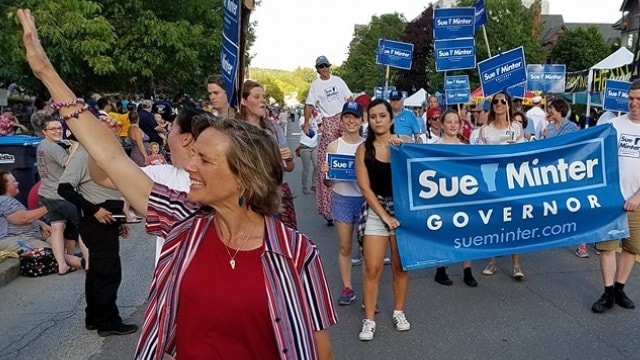 Despite the fact that the state enjoys the some of the lowest murder rates in the nation, would-be governor Sue Minter wants expanded background checks and an assault weapon ban.

Minter is the Democratic candidate to replace outgoing Gov. Peter Shumlin, himself a Democrat, against a challenge from the state’s Republican Lt. Gov. Phil Scott. A former state representative and head of the Vermont Agency of Transportation, Minter has been outspoken on the subject of gun politics in her campaign.

“Gun violence is a crisis in our country,” she wrote in an op-ed piece for the VT Digger, reposted to her campaign site. “It’s happening in our schools, our movie theaters, our workplaces, our community health centers, our places of worship. It is just common sense that we need to do something.”

While pointing out that she supports the Second Amendment and “Vermont’s hunting heritage” Minter advocates expanded background checks for most private gun transfers.

In a recent appearance on VPR’s Vermont Edition, Minter doubled down and expanded her platform to include an an arbitrary prohibition on some guns currently legal in the state, saying, “[A]fter the tragedy in Orlando, have stepped forward to say we also need to ban assault weapons.”

Second Amendment advocates argue that Minter is pushing an agenda that ignores the facts.

According to Federal Bureau of Investigation statistics, Vermont is one of the safest places to live in the country, having some of the lowest violent crime and murder rates. In 2014, the FBI noted 10 murders in the state, six of those being with a firearm, two of which were with a rifle. This was a five-way tie for the second lowest number of firearm homicides in the country between the state and Maine, New Hampshire, North Dakota and South Dakota.

To this, Minter says, “People say we don’t have a problem here in Vermont, but I know we do, and it is behind closed doors and it’s the issue of domestic violence.”

As cited in the annual report of the Vermont Domestic Violence Fatality Review Commission of the instances reported in 2014, four resulted in a homicide that was tied to a firearm as was the only suicide tied to a murder.

“If Sue Minter thinks she can become governor of Vermont by running on a platform that attacks the rights of good and decent Vermonters, then she must be walking around in Burlington talking to soccer moms and trust fund kiddies. The rest of us aren’t having that,” said Eddie Garcia, founder of the Vermont Citizens Defense League.

Historically, Vermont had a 100-year run of Republican governors that ended with the election of Democrat Philip H. Hoff in 1963. Since then, the last eight governors have alternated Dem or GOP affiliations with four from each party occupying the spot as the state’s chief executive.