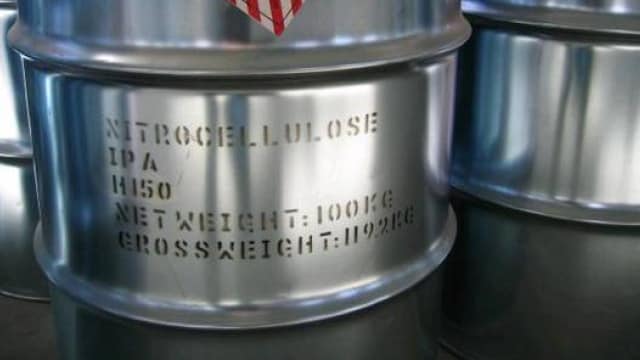 Wetted nitrocellulose is used in the production of everything from varnishes and thinners to ammunition and propellant, and the ATF has rescinded their recent determination that the component was a high explosive pending “further industry outreach.” (Photo: ec21.com)

The Bureau of Alcohol, Tobacco, Firearms and Explosives has walked back an announcement it now viewed wetted nitrocellulose as a high explosive and will work with the firearms industry on clarification.

In the agency’s June 2016 Explosives Industry Newsletter, ATF determined that nitrocellulose– also known as flash cotton or guncotton– containing greater than 12.6 percent nitrogen is a high explosive and had to be stored moving forward in a Type 1 or 2 magazine, adding a new level of control and oversight in its transport. In its wet state, nitrocellulose was considered safe to handle and ship and relatively inert, needing to be dried before use. This changed the logistics of acquiring a component used in propellant and ammunition production which had before then not been considered an explosive material.

As pointed out in a press release from Washington D.C.-based defense industry law firm Reeves & Dola, the move was puzzling.

“Industry members have relied on the exemption for wetted nitrocellulose for many years and are aware of no accidental detonations or diversion of this product into illicit channels,” the firm noted. “Consequently, it is unclear why ATF believed it necessary to change its policy and, more importantly, why ATF announced the change in a newsletter article with no advance notice to industry.”

Some in conservative media outlets classified the move as a backdoor ammunition grab from the White House that “sent the entire firearms industry into a tailspin overnight.”

Another attorney specializing in firearms law, Joshua Prince, was even more forthcoming as to the implications of such a move.

“If smokeless powders are now considered high explosives then ammunition can no longer be sold on store shelves,” he wrote. “Manufacturers need to completely redesign their operations, rebuilding their facilities and ensuring their personnel meet the stringent requirements. Simply put, if ATF intends to enforce this new designation ammunition is going to be almost impossible to acquire.”

On Wednesday, the ATF issued an addendum to their June newsletter citing they had been in contact with industry members who import, transport, store or employ wetted nitrocellulose in the production of ammunition, and rescinded their determination that the component was a high explosive pending “further industry outreach.”

“We welcome ATF’s announcement today and look forward to engaging ATF in a constructive dialogue on behalf of our industry,” said Keane in an email. “We appreciate ATF’s goal is to protect public safety and look forward to resolving any confusion or misunderstanding that may have arisen and explaining how longstanding ATF-approved industry practices have achieved that goal.”