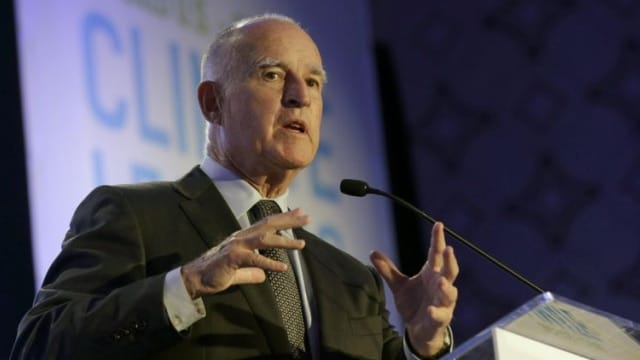 Gov. Brown will soon face whether to sign or veto a measure that would remove the cap on how much local agencies can charge for carry permits. (Photo: Nick Ut/AP)

An Assembly bill that could hike the cost of gun permits in the state is now headed to California Gov. Jerry Brown’s desk.

The measure, introduced in June by state Assemblyman Kevin McCarty, requires that the fee charged for a CCW application cover the full costs of both issuing and enforcing the permit. Amended in the Senate, the Assembly concurred 41-29 in a Democrat heavy vote on Tuesday, sending the measure to enrollment on Aug. 31.

McCarty, a Sacramento Democrat, argues his county had a $250,000 shortfall caused by its permitting program.

Currently Sacramento County charges a $20 filing fee; $120 for DOJ fingerprinting, criminal history check and firearms eligibility letter; and a final $80 at the time of an applicant’s interview. Two-year renewals are $77 and updates to a permit such as address changes are another $10. Earlier this year Sheriff Scott Jones froze the permitting program citing budget concerns, electing to only process renewals for several months.

“A CCW permit is a privilege and should only be given to those who have a genuine need to carry a concealed firearm,” said McCarty in a statement, adding, “already strained local governments shouldn’t be forced to cut essential programs because the fees for this privilege don’t cover the full costs to Police and Sheriff’s Departments.”

The bill, AB 450, deletes the current fee schedule that sheriffs and police chiefs can charge for processing concealed carry applications. Current guidelines allow for a maximum of $100 for a new application, excluding fingerprint and training costs. In addition, under the new proposal, applicants can be charged for enforcement of the jurisdiction’s permits– which the language of the act does not identify or put a cap on.

The National Rifle Association holds McCarty’s bill is “so broadly worded that it’s unclear what the author is even trying to accomplish other than to allow such ambiguity that law enforcement could price out ordinary citizens.”

“AB 450 is McCarty’s most recent attempt to jump on the ‘gut-and-amend everything into a gun bill’ bandwagon,” Craig J. DeLuz, director of communications with the Firearms Policy Coalition, told Guns. com. “In this bill he has managed to create an almost illegible and legally untenable open-ended fee increase on the ministerial and discretionary services of local elected sheriffs and appointed police chiefs in order to chill the access of members of the public to licenses to carry concealed weapons and to settle local political scores.”