Federal court: Medical marijuana cardholders have no 2A rights 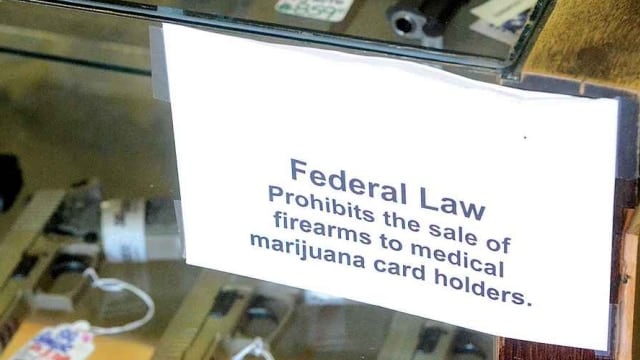 An appeals court found this week that there is enough suspicion that a medical marijuana cardholder is a user of illegal drugs that gun dealers should continue to deny gun sales to them. (Photo: nwmjlaw.com)

A three-judge panel of the U.S. 9th Circuit Court of Appeals on Wednesday held that refusing gun sales to otherwise law-abiding cannabis patients does not violate their Second Amendment rights.

Since 2000, the state of Nevada has granted marijuana registration cards exempting those who hold them from state prosecution for marijuana-related crimes. In May 2011, S. Rowan Wilson was issued such a card by the state. Five months later, Wilson tried to purchase a firearm at a dealer in Moundhouse, Nevada, but was refused over Question 11.e on her ATF Form 4473, which asks if the purchaser is an unlawful user of a controlled substance. The gunshop owner knew Wilson to be a card holder and in accordance with federal policies that refuse to recognize state marijuana cards as an exception to regulations against the drug, the firearms dealer refused the sale.

This led Wilson to file suit in U.S. District Court against the government on First, Second and Fifth Amendment grounds, which was dismissed in March 2014.

This week an appeals court upheld affirmed that decision.

In part, Wilson argued she was a non-practicing marijuana user and simply had a card to express her First Amendment rights. To this, the court held she could simply have let the card lapse then proceed to purchase a firearm.

“Wilson could have amassed legal firearms before acquiring a registry card, and [the ATF guidelines] would not impede her right to keep her firearms or to use them to protect herself and her home,” Rakoff wrote. “In addition, Wilson could acquire firearms and exercise her right to self-defense at any time by surrendering her registry card, thereby demonstrating to a firearms dealer that there is no reasonable cause to believe she is an unlawful drug user.”

The court rejected arguments that the government’s policy went too far.

“It may be argued that medical marijuana users are less likely to commit violent crimes, as they often suffer from debilitating illnesses, for which marijuana may be an effective palliative,” reads the ruling. “They also may be less likely than other illegal drug users to interact with law enforcement officers or make purchases through illicit channels. But those hypotheses are not sufficient to overcome Congress’s reasonable conclusion that the use of such drugs raises the risk of irrational or unpredictable behavior with which gun use should not be associated.”

Currently, at least 25 states and the District of Columbia have statutes to allow the legal use of cannabis for authorized patients while others have legalized cannabis-derived treatments. However, the ATF has long held that any sale or possession of firearms by those who use marijuana, even if allowed by state law, remains criminal.

The DEA classifies marijuana as a Schedule I drug, which is reserved for “the most dangerous drugs of all the drug schedules with potentially severe psychological or physical dependence.”

Wilson is not ready to throw in the towel just yet.

“We are exploring our options, but we certainly plan to exhaust all available avenues,” Chaz Rainey, Wilson’s attorney, told Guns.com in an email responding to Wednesday’s court ruling.

Advocates with the National Organization for the Reform of Marijuana Laws feel the ruling goes against basic civil rights.

“There is no credible justification for a ‘marijuana exception’ to the U.S. Constitution,” NORML Deputy Director Paul Armentano told Guns.com. “Responsible adults who use cannabis in a manner that is compliant with the laws of their states ought to receive the same legal rights and protections as do other citizens. It is incumbent that members of Congress act swiftly to amend cannabis’ criminal status in a way that comports with both public and scientific opinion, as well as its rapidly changing legal status under state laws.”

Lawmakers in the House and Senate in recent years have introduced legislation to ban the ATF from using federal funds to prevent medical marijuana patients from possessing firearms, but they have died in committee.