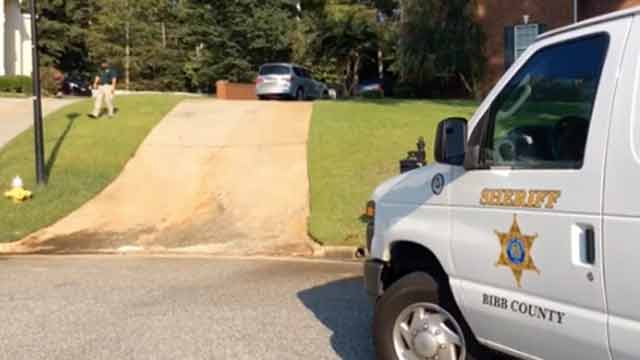 Authorities scour the property for additional evidence the day after the shooting. (Photo: The Telegraph)

A man accused of stalking his ex-girlfriend was shot and killed by her acquaintance outside of a home in north Macon, Georgia, Sunday night.

Julia Brooks and Brian Kim, both 27 years old, were leaving Kim’s residence just after 10 p.m. when Kim was alerted through a cell phone app that there was a possible intruder at the home. They returned to the house, only to find the suspect come out from around and corner and move towards them in what the sheriff’s office described in a news release as a “threatening manner.”

The suspect was recognized by Brooks as her ex-boyfriend, 55-year-old Robert Peak. Brooks previously moved out of another state in an attempt to get away from Peak, but he was apparently still able to locate her.

Peak was armed with a gun, as was Kim. There was an exchange of gunfire between Kim and Peak, but Peak was the only one who was struck.

When deputies arrived a short time later, they found Peak lying in the driveway outside of Kim’s home. He was pronounced dead at the scene. There were no reports of either Kim or Brooks being injured.

According to authorities, Peak was carrying a wallet that contained identification with numerous names. A car with Louisiana license plates, possibly a rental and likely driven by Peak, was located close to Kim’s home.

Lt. Randy Gonzalez, spokesman for the Bibb County Sheriff’s Office, said a prowler was reported in the same neighborhood the night before the confrontation and subsequent shooting occurred. Gonzalez said they believe the prowler may have been Peak.

A couple who live across the street from Kim’s house told The Telegraph they were shocked to awaken with flashing blue lights everywhere. They said they were relived to know Kim and Brooks were unharmed and believe Kim acted in self-defense.

Kim declined to talk with reporters.