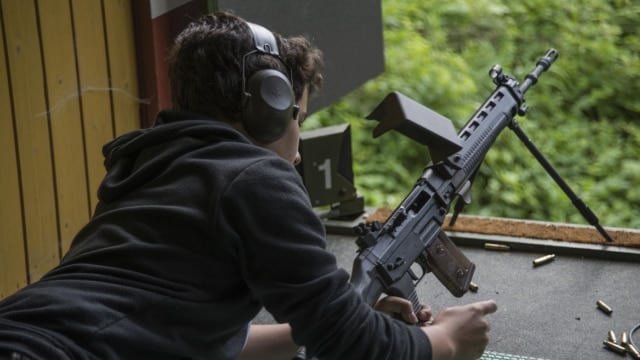 A Swiss “Jungschütze” with his SIG 550 rifle, a common sight in a country with a long tradition of near-universal conscription and institutionalized marksmanship. At least for now. (Photo: Reddit)

Switzerland and the European Union are at odds over efforts by the EU to curb the neutral country’s treasured gun culture and citizen-soldier tradition.

While not an EU-member, Switzerland has entered into a series of treaties over the years to adopt various laws in conjunction with the organization in order to trade freely with in the European Single Market. At the same time, the Alpine country, which has been more or less neutral since splitting from the Holy Roman Empire in 1499, has maintained a tradition of national service in their military while keeping some of the loosest gun laws in Europe if not the world.

With over 3,000 shooting ranges, a vibrant gun culture that embraces marksmanship and fires some 75 million rounds per year in practice against a population of 8 million persons, and a firearms manufacturing tradition that created SIG and Oerlikon Contraves, Switzerland is comfortable with guns. In fact, it is estimated there are some 600,000 firearms capable of full-auto fire in civilian hands in the nation.

But the EU is in the midst of a crack down in the aftermath of terrorist attacks in Paris, Brussels and elsewhere that has seen everything from museum pieces and replicas to black powder and airguns come under increased scrutiny.

Now, as reported by Reuters, EU proposals that could see Switzerland add mandatory psychological tests and club membership requirements to gun owners has some seeing red.

“When conflicts arise, Switzerland must put its sovereignty first,” said Christoph Blocher, a businessman and vice president of the SVP, the country’s biggest political party.

Another target for scrutiny from the alliance: the practice of allowing retiring soldiers to keep their SIG rifles and officers to retain their sidearms when they leave the military.

Likewise, the country has a low crime rate.

According to the U.S. State Department’s Overseas Security Advisory Council there were 41 murders in Switzerland in 2014, the lowest rate since 1982, and the primary travel warning issued to Americans visiting the country is to be on the lookout for pickpockets and purse thieves in high traffic public areas.