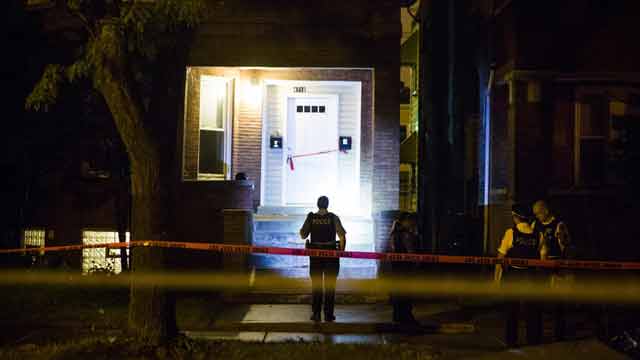 Police officers work the scene of an August shooting in Chicago, one of more than 400 for the month. (Photo: Chicago Tribune)

For the month of August, the city of Chicago recorded 86 homicides, the most for a single month in nearly 20 years.

The city hasn’t seen a month of such violence since October 1997 when 79 people were killed, but August took the 20-year record with two days still remaining. Altogether, for the month of August, over 400 people were shot, with more than 2,800 gunshot victims for the entire year thus far, nearly four times as many as recorded for 1997, and up — although not as much — from last year.

So far this year, The Windy City has seen 487 homicides, with four months still to go, while last year the city recorded 491 for the entire year. Similarly, there were just under 3,000 gunshot victims recorded for all of 2015, according to data collected by the Chicago Tribune.

Much of the violence — which is primarily focused on the city’s South and West sides — is gang-related, police say, with ever-growing disputes in a high-tech society being fueled by spats on social media.

And along with gangs and drugs, authorities have also pointed to a problem with illegal guns constantly being brought into the city, despite some of the most stringent gun laws in the country. Still, Chicago Police Superintendent Eddie Johnson has pushed lawmakers for legislation that would hand over harsher sentences to repeat offenders caught with illegal guns.

Additionally, Johnson previously noted a breakdown of trust between police and the communities they are sworn to protect and serve as another contribution to the problem.

But Chicago isn’t the only city that has seen an increase in violent crimes in recent years. In fact, over 40 cities across the country have reported spikes in violence and it doesn’t appear to be limited to just the larger cities either.

“It’s being reported on at local levels, but in my view, it’s not getting the attention at the national level it deserves,” FBI Director James Comey said in June. “I don’t know what the answer is, but holy cow, do we have a problem.”