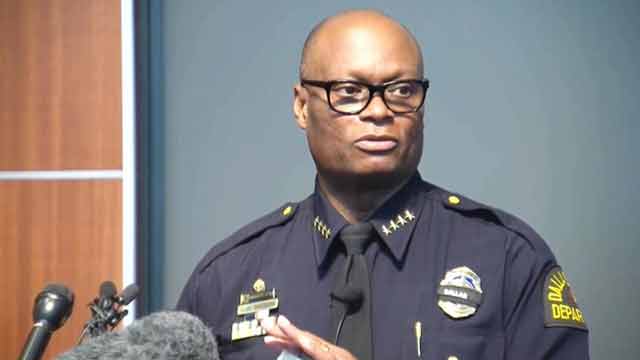 After more than 33 years on the force and leading the country through one of the deadliest attacks on law enforcement in U.S. history, Dallas Police Chief David Brown announced his plans to retire Thursday.

Brown, who served six years as police chief, the city’s longest-serving chief since 1960, will officially retire Oct. 22. Assistant Chief David Pughes will serve as interim chief until a new chief is found.

The announcement came as a shock to some, but Dallas Mayor Mike Rawlings said in a press conference it’s been a decision a long time coming, even before the July ambush that ended with the shooting deaths of five officers and 12 others injured.

“July 7 happened and we kind of forgot about it,” Rawlings said.

Rawlings said after much thought and prayer, Brown, along with other city officials, decided retirement in the fall would be the best choice.

“He’s a man of notoriety and he has options, but he told me he just wants to sit and do nothing,” Rawlings said.

Despite what could be described as nothing less than a rough start, as police chief, Brown helped to dramatically decrease the city’s crime rates. Less than two months after he took the position of Chief of Police, Brown’s son fatally shot a police officer, before authorities returned fire, killing him. Despite the tragedy, Brown returned to work quickly after burying his son and persevered.

In his announcement, Brown called law enforcement a “noble profession” and his time serving the Dallas community “a true honor and a humbling experience.”

“I became a Dallas cop in 1983 because of the crack cocaine epidemic’s impact on my neighborhood in Oak Cliff. I wanted to be part of the solution. Since that time I have taken great pride in knowing that we have always been part of the solution and helped to make Dallas the world-class city it is today,” Brown said.

“Let’s always remember the fallen officers including the five officers on July 7, 2016, and the brave men and women of the Dallas Police Department for their sacrifices to keep Dallas safe,” he added. “Their memory will remain with all of us forever. I know the people of Dallas will never forget the ultimate sacrifice they made on the streets of our city that awful night.”

Brown acknowledged that the decision was “difficult,” thanked his family for their love and support and asked for understanding and well wishes.

Brown is currently on vacation, but said he will return September 8, at such time he will hold a press conference.

His entire announcement can he read here.