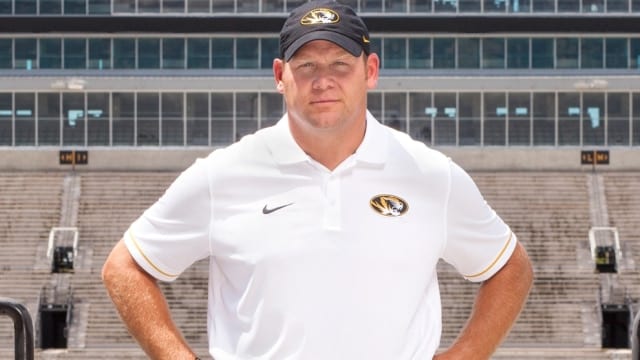 University of Missouri football coach Barry Odom made some comments on an SEC media call this week on guns that triggered a storm. (Photo: missouri.edu)

While the university has a broad no-guns policy that has seen repeated court challenges, Odom’s remarks came in a teleconference Wednesday in which he noted on the school’s policy, “You’ve got to make sure with the rules, and you mentioned hunting and some things like that, but if there is a handgun issue, then we deal with it and not allow it in the program.”

Reporter Matthew Stevens with the Montgomery Advertiser ran with comments, posting to social media that, “Missouri head coach Barry Odom says his players are prohibited to legally own a handgun while they are a member of the Tigers football team.”

The story was reported nationally by Fox Sports and promoted by conservative commentators such as Dana Loesch, but has since been removed.

Stevens has since noted that a number of SEC coaches– Texas A&M’s Kevin Sumlin, Mississippi State’s Dan Mullen, Vanderbilt’s Derek Mason and Kentucky’s Mark Stoops – stated they have team policies restricting their players from having “weapons” as a part of being a member of the football program.

Odom, who has been at Mizzou for 14 years in addition to playing on the team as an undergrad in the 1990s, is in his first season as head coach and University officials downplayed his remarks, telling Stevens in a statement, “What Coach (Odom) was referring to when he talked about ‘not allowing it in the program’ was the policy that states that if a player has a legal issue, and an illegal gun is involved as part of that legal issue, then the player is removed from the program.”

Since then a number of state lawmakers have expressed concerns.

“It seems to me that the university and the MU Athletic Department believe these student citizens may be just football players,” Sen. Brian Munzlinger, R-Williamstown, told the Missouri Times. “But in Missouri and in the United States of America, these students are still citizens, and no publicly funded institution should have a policy that overrides our Missouri laws, our state constitution or the U.S. Constitution.”

Even as some, such as state Rep. Caleb Jones, R-Columbia, spoke with Odom and assuaged their fears that his remarks were misinterpreted, gun rights groups are pressing the issue.

On Wednesday, the Firearms Policy Coalition and Firearms Policy Foundation announced they have launched a joint investigation into the gun policies of public universities and their sports teams, citing the Odom controversy. As such, they have sent requests to the University of Missouri, asking for copies of “all records that are, relate, refer to” the “current policies and practices of any University sports program” on firearm acquisition, possession, carry, storage, or transfer by law-abiding students.

“Any policy that makes law-abiding students choose between participation in school programs and the lawful exercise of their civil rights should be quickly discarded by the school – or litigated, if that’s what it takes,” said FPC President and FPF chair Brandon Combs in a statement emailed to Guns.com.