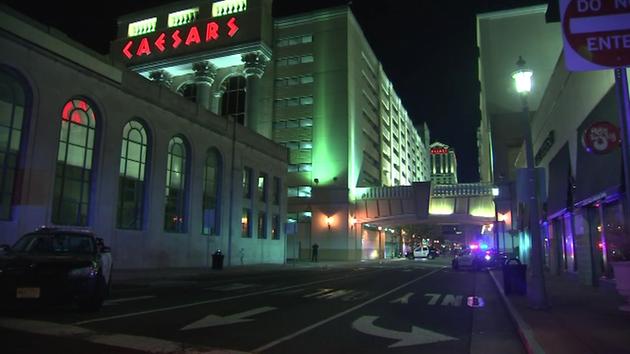 The shooting happened around 2:30 a.m. Saturday in a parking garage near Caesars Casino in Atlantic City. (Photo: WPVI)

A New Jersey police officer is in critical condition after being shot while responding to a robbery in progress near Caesars Casino in Atlantic City.

The shooting unfolded around 2:30 a.m. when New Jersey police stumbled upon a robbery while patrolling near the casino’s parking garage. Two officers approached a group of six men and that’s when authorities say bullets began to fly. One officer was immediately struck in the head but survived. He remains in critical condition at AtlantiCare Regional Medical Center.

The second officer returned fire, hitting one of the suspects. That man, identified as 25-year-old Jerome Damon, fled the scene but later died of his injuries a few blocks away.

The remaining men dispersed and initially evaded police; but were later identified after footage from a security camera was released to local news outlets.

Three suspects fully cooperated with police and were released after being cleared of any charges. Two men, however, remain in police custody.  Martell Chisholm, 19, and Demetrius Cross, 28, are charged with two counts of attempted murder, robbery and weapons offenses.

Mayor Don Guardian commented on Saturday’s shooting, turning the blame from the shooters to firearms.

“These are good examples of what happens when too many of these assault weapons are in the wrong hands,” he told local news.

Police have not indicated what type of guns were used in the assault.

Saturday’s gunfire came after another incident earlier in the week left one person dead.

On Thursday, in what police are calling a domestic dispute, Lewis Maisonet, 55, fatally shot Christopher Romero, 26. Romero was the manager of a Zumiez shoe store in the Tanger outlet mall The Walk. Maisonet shot and killed Romero at the mall before fleeing and eventually shooting himself in another store. Maisonet was last reported in critical condition at a nearby hospital.

The shooting happened mere hours before the Zac Brown Band was scheduled to perform in the lead up to the town’s big holiday weekend.