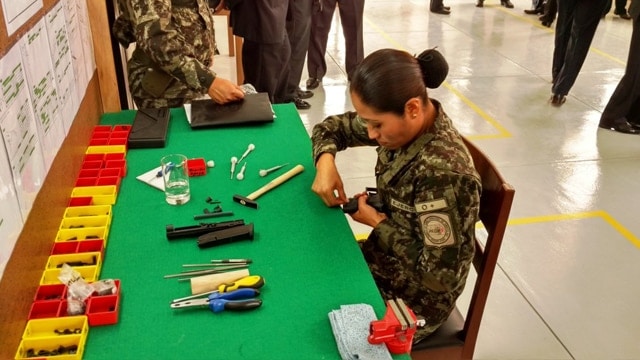 A Peruvian soldier works on a firearm in newly-opened plant in Lima meant for assembly and repair of pistols from Česká zbrojovka, or CZ. (Photo: CZ)

Czech gun maker CZ opened a manufacturing facility in Peru earlier this month, according to an announcement Thursday. The Peruvian FAME army plant in Lima opened space for assembly and repairs of CZ pistols.

Marcel Rios, CZ’s sales manager for Latin America, said this is the first investment cooperation between the two companies and “the first case of initiating technological cooperation of (CZ) for the whole region of Latin America.”

Senior management from both companies along with government officials attended the opening. Czech’s ambassador in Lima, Pavel Bechný, discussed the importance of developing strong relations between the two countries.

“Start of the production cooperation is an important moment in the development of bilateral relations in defense and security, which in recent years has also become the subject of more structured dialogue between our countries, whereas close communication now takes place also at the level of the Armed Forces,” he said.

In preparation for the opening, the Czech company supplied equipment, tools and instruments and in recent months trained technical personnel, which has launched a long-term manufacturing and technological cooperation.

CZ forecasts 40 percent growth in Latin America over the next 15 years.