Over 80 guns stolen from MN gun shop in 60 seconds 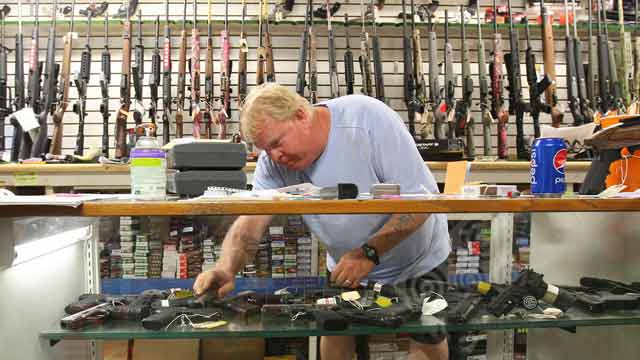 Shop owner Keith Shones, who grabbed an AR-15 when he realized someone was breaking in, said next time the suspects might not be so lucky. (Photo: Ken Klotzbach / Post-Bulletin)

Authorities are searching for three suspects responsible for an early morning break-in at a Millville, Minnesota, gun shop Friday.

According to the Wabasha County Sheriff’s Office, the burglary occurred around 5 a.m. Keith Shones, owner of Millville Gun & Rod Shop, heard the commotion as his wife was getting ready for work and his step-daughter was feeding her newborn baby. Shones’ step-daughter opened the garage, at first believing someone was tampering with her car. However, when she heard glass shatter, she realized the gun shop, which is connected to their home, was being broken into.

“She said, ‘Somebody broke into the gun shop.’ So I grabbed my gun and came running out and they were already gone,” Shones recalled in an interview with the Post-Bulletin.

A review of the business’ surveillance videos showed the burglars, at least one of whom was armed with a gun before the break-in, spent about 45 minutes on the outside of the store before gaining entry. It appeared a blow torch was used to melt the phone and cable wires, then the bars on the windows and doors were targeted.

Once the bars were broken, two of the suspects were seen bursting through the front door, while the third suspect kept watch outside – all the while armed with a gun.

“They didn’t care if anybody seen them or not,” Shones told a local NBC affiliate. “They were ready for a fire fight.”

Meanwhile, one suspect stuffed a backpack full of ammunition, while the second suspect grabbed guns from off of the wall and out of glass display cases, which he smashed without hesitation.

“This guy takes his elbow, busts right through the glass, starts grabbing handguns out by the handful,” Shones said.

Altogether, the suspects only spent a minute inside the shop, but some 60 to 80 firearms were initially thought to be stolen. On Sunday, Shones was still comparing his catalog of roughly 1,000 firearms to his remaining inventory to count his losses, but by Monday, the count was at 86, with an estimated value of around $40,000.

Shones started cleanup and already replaced the metal bars on the door, but he’s more concerned about the guns that came out of his shop, are now on the streets, and may be used to commit other crimes.