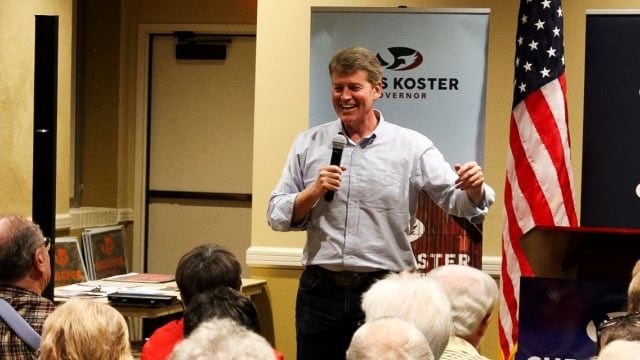 The NRA is endorsing the Show Me State’s Democrat AG over a Republican candidate for governor. (Photo: Chris Koster for Governor)

Koster, 52, is fresh off a Democratic primary though he previously served as a GOP lawmaker in the state legislature and is facing off against Grietens, 42, who likewise beat three other candidates in the Republican primary last month and has never held public office. Though both publicly espouse support for the Second Amendment, the National Rifle Association has chosen Koster as their pick to replace outgoing term-limited Democrat, Gov. Jay Nixon, himself a former Missouri Attorney General.

“Chris Koster has never wavered from his Second Amendment beliefs. For over 17 years, he has fought to preserve the constitutional rights of law-abiding Missourians,” said Chris W. Cox, chair of the NRA’s Political Victory Fund in a statement. “The NRA is proud to endorse Chris Koster and we urge Missouri’s gun owners and sportsmen to get out this November and vote to elect a governor with a proven record of fighting to preserve the Second Amendment.”

The gun rights group cites Koster’s support of a veto override on SB 656, a bill to make Missouri the 11th in the U.S. to codify the right to carry a concealed handgun without a permit. Notably, the attorney general has also backed a suit against the University of Missouri on behalf of a law professor seeking to carry his gun on campus for self-defense as well as signed onto a number of amicus briefs in support of gun rights outside of Missouri.

Koster supports mandatory minimums for felons in possession of guns as well as special gun courts and high bail amounts for criminals who use firearms. He has further received the endorsement of the Missouri Farm Bureau, the state’s Corn Growers and Cattlemen’s associations and the Fraternal Order of Police.

When it comes to money, an analysis by St. Louis Public Radio has Greitens with some $3.2 million in his war chest while Koster has $9.4 million in the bank left to spend. Notably, former New York Mayor Michael Bloomberg’s Independence USA PAC has been running anti-Koster ads in the Kansas City media market aiming to hit the attorney general on his opposition to Obama administration energy policies.

Greitens is a lieutenant commander in the Navy Reserve and in 2002 finished Basic Underwater Demolition/SEAL (BUD/S) training before going on to deploy several times to Afghanistan, Iraq and elsewhere. Last month his campaign unveiled an ad with him shooting a Mini-Gun as a dubbed narrator railed against “Obama’s Democrat machine.”

His campaign was blunt in the fact they did not expect the endorsement of the NRA.

“We’re not gonna win the career politician insider endorsement contest,” Greitens’ campaign manager Austin Chambers said in a statement obtained by the St. Louis Post-Dispatch. “But no one is stronger than Eric on Second Amendment issues and no one will fight harder to grow jobs and clean up the same old politics as usual holding Missouri back.”