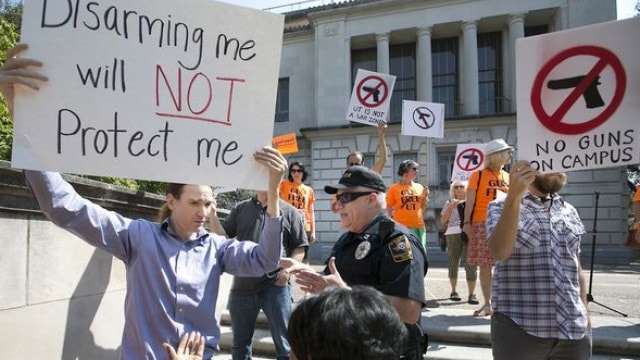 While being debated in the legislature last year, public universities said they could easily see $47 million in costs associated with allowing guns on campus. The actual figure currently stands at less than $1 million. (Photo: Ralph Barrera/The Statesman)

During the legislative process for campus carry in Texas, two university systems estimated the cost would be tens of millions, but in actuality costs appear to be far less.

In 2015, when measures were introduced to the state Senate, the University of Houston and University of Texas estimated more than $47 million in expenditures over a six year period to implement campus carry, The Houston Chronicle reported.

The funds would pay for installation of gun safes, “de-escalation” and “judgment” training for staff, and additional security personnel.

Opponents of the measure, in particular Moms Demand Action, repeatedly used the figure in press materials against the bill. “Our law makers are letting the gun lobby and extremists bully them into prioritizing dangerous, unpopular bills and now, they are also siphoning funds from a hospital that is vital to my family and other families like mine,” said one Texas volunteer with the group, an instructor at a community college diagnosed with cancer.

In an agency fiscal note from the UT system to lawmakers, the school estimated a cost of $39,327,319 over six years to implement the practice, including an outlay of nearly $10 million the first year. Most of this was associated with adding another 52 full time security employees and expanding surveillance camera networks.

State lawmakers balked at including the figures from the schools in their legislative filings on the proposal. Their final fiscal note with the bill found “no significant fiscal implication to the State is anticipated,” but did allow that college districts could experience increased costs related to campus police operations, security programs, and staff training. Yet, they it did not put a price tag on that spending.

Now, budget information from about 40 colleges and universities across the Lone Star State shows that combined cost to implement the new law that took effect last month was just $955,000, typically spent on signage, The Dallas Morning News reported.

The news left some lawmakers with a feeling of vindication. “No one wanted to listen,” said Rep. Allen Fletcher, R-Tomball, who backed the legislation. “It was just kind of ludicrous that there was going to be any big outlay of money.”

The figures obtained by The Dallas Morning News does not take into account harder to quantify collateral costs from job applicants, prospective students and invited speakers deciding not to come to universities because of the new policy or for time spent by school officials in creating new policies.

“The chief has spent countless hours meeting and talking with students, faculty, parents, staff and reporters about campus carry,” said Texas Woman’s University representative Amanda Simpson about the school’s campus police chief. “She has fielded every email, phone call, office drop in, meeting request [and] stop by as she walks campus.”

Still, gun rights advocates argue even the funds spent so far may have been unnecessary, and contends the possibly inflated figures presented to lawmakers last year were used as a scare tactic.

“It’s no surprise that yet another liberal claim about guns on campus has been proven false,” Open Carry Texas President CJ Grisham told Guns.com. “Liberals have nothing to argue on and therefore they resort to lies, misrepresentation, and fear mongering. Had they simply obeyed the law instead of trying to undermine it, the campus carry law wouldn’t have cost a dime. Just like every other one of their fear tactics related to open carry, the campus carry reality will be a complete 180 degrees from what the liberals say it is going to be. It will be a non-issue.”