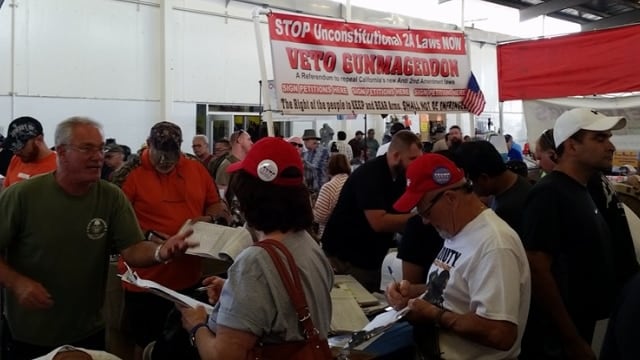 At nearly 700 petition gathering locations spread across gun shops, ranges and gun shows in the state, Californians are signing to put a list of repeal initiatives against new gun laws on the November ballot. (Photo: Veto Gunmageddon)

“New people are coming in every day to sign the petitions,” the owner of a Carlsbad gun shop and range told Guns.com about seven petitions circulating to put new gun laws to a vote of the people.

As previously reported, San Diego businessman Barry Bahrami filed paperwork with the Secretary of State’s office on July 15 to repeal a half-dozen new laws signed by Gov. Jerry Brown through voter referendum. The laws are set to take effect in 2017, but Bahrami and his fellow Second Amendment activists, who filed a seventh initiative since then, are planning to short circuit that from happening with the power of the ballot.

Issued title by Attorney General Kamala Harris’ office, the petitions began circulating last month, trying to raise 450,000 signatures of registered voters on each petition to satisfy the 365,000 required by law before Sept. 29.

The efforts began on a California-based gun forum, but have now moved to a dedicated website while the group’s social media account has grown to nearly 17,000 followers.

Lisa Gunther, with Gunther Guns in Carlsbad runs one of the 700 signing locations in the state, geared towards involving California’s gun owners in the political process. She told Guns.com this week the word is getting out and she is seeing lots of new faces.

“Our store has had at least 600 new visitors/signers due to the petition,” Gunther told Guns.com. “They come in specifically to sign the petition once they hear about it from friends or on social media. Our regular customers sign once we tell them about the petitions when they are in the store.”

Unlike past efforts to mobilize calls and letters to lawmakers and the governor’s office against anti-gun legislation that often falls on deaf ears, Gunther said the grassroots effort behind this push seems to be working.

“There is big interest in these petitions. I think a lot more people are signing the petitions than would be calling the governor,” Gunther said. “This is easier. No phone nightmare to navigate through.”

Bahrami is confident the effort will succeed in getting the measures in front of voters in November, but is also aware the clock is ticking on the petitions.

“It’s ours to lose now. But we run a real risk of fumbling the ball on the one-yard line,” Bahrami told Guns.com this week. “As you know, we are all volunteers and those we have actually working are exhausted. They are also very dedicated and will not stop but fatigue is clearly a factor. Multiple referendums to this scale have never been done before. It is a massive job.”

The organizer, who is aiming to have 900 signing locations online in coming days, said they are dedicated and are fighting through fatigue to get the word out and signatures on paper.

“The campaign can really use fresh volunteers so we can finish strong,” Bahrami said. “But all our volunteers are determined to get this done. It’s no different from a marathon runner in the final few miles. Determined but exhausted.”

It’s not just Gunther’s store that is seeing a strong turnout, and Bahrami said they are finding many people still do not even know that the laws were enacted, and are pending to take effect in 2017.

Several of the new laws focus on banning bullet buttons, legacy magazines and making some guns such as AR-15s harder to get. This is causing a run on black rifles and firearms in general as evidenced by the FBIs NICS data for the past few months for the state. Gunther said it’s a hot topic of conversation for customers in her store.

“There is an increased interest in AR purchases. We have seen a significant uptick in sales for summer,” she said, but concedes some customers seem to be shying away from AR’s because of these pending laws.

As for the looming laws themselves, she was frank in her assessment. “None of these new bills will curb crime, in my opinion. They punish law-abiding citizens. Criminals don’t follow laws,” Gunther said.

Bahrami said the signature gathering will start winding down by Sept. 24, to enable the petitions to be amassed and delivered to the Secretary of State’s office by the 29th. Then comes outreach to educate voters about them should they make the ballot. He intends to have the petition process be the fly in the ointment on new gun control laws in the state moving forward, to provide lawmakers a moment of pause during the legislative process while giving the Sunshine State’s estimated 13 million gun owners the chance to vote up or down on the measure.

“Imagine there never being another gun control bill in California without a guaranteed referendum to follow,” he said.