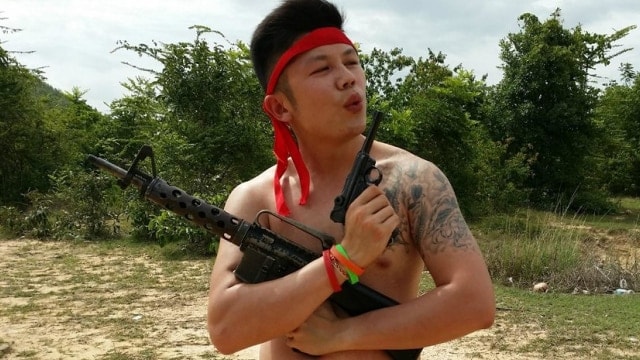 A visitor to a shooting range in the Cambodian capital of Phnom Penh mugs for the camera. Though guns are banned for civilian ownership, such opportunities to shoot Vietnam War era relics for a fee abound. (Photo: TripAdvisor)

A recent article published by Voice of America Khmer holds that Cambodians are “shocked” at mass killings in the United States, and have some words of wisdom.

“What Cambodians find difficult to understand is why America – the most powerful and wealthiest country in the world – is unable to solve its own gun problems, and the mass shootings that occur with devastating regularity,” opens the piece, without noting that the homicide rate in the U.S. has been trending downward for decades and the 2014 statistics, the latest currently available, show the lowest murder rate recorded since 1963.

Cambodia’s rate? Well, we’ll get to that.

Some wisdom from the VOA article, offered by Chheang Vannarith, chair of the advisory board of the Cambodia Institute for Strategic Studies:

“First is gun management. Second is pushing back on extremist trends, and discrimination in American society,” Vannarith said.

The solution to gun management is the most straightforward, he said.

If federal governments or state governments in the US cannot manage gun ownership effectively, then people should not be allowed to carry guns.

“The new US government should endorse a high standard of gun law and should not allow the people to buy or stock guns at home or carry with themselves,” he said.

With that gem, let’s talk about gun management.

Cambodia has seen more than its fair share of horrors in the past couple of centuries. The same culture that produced Angkor Wat, the ancient temple complex and largest religious monument in the world, was colonized by French adventurers in the 19th Century, then suffered Japanese occupation during World War II, was used as a battleground by North Vietnamese troops and U.S. air power along the Ho Chi Minh trail during the enduring conflict in Southeast Asia, and saw a brutal civil war that led to a Khmer Rouge victory in 1975.

Then things really got bad under Khmer leader Pol Pot. A peculiar thing occurred during this time period, classified as “auto-genocide,” that differed from many other genocides in history that targeted minority groups — in Cambodia everyone was equally targeted.

From the United States Holocaust Museum:

The Khmer Rouge began their reign with the murder of surrendering officials of the former government and the brutal emptying of the capital and other cities. Black-clad soldiers marched millions of people into the countryside and put them to work as slaves digging canals and tending crops. Religion, popular culture, and all forms of self-expression were forbidden. Families were split apart, with children forced into mobile labor brigades.

Anyone who questioned the new order risked torture and death by a blow to the head. Ethnic minorities faced particular persecution. Not even members of the Khmer Rouge were safe. The movement killed thousands of its own as suspected traitors and spies for foreign powers. In time, gross mismanagement of the economy led to shortages of food and medicine, and untold numbers of Cambodians succumbed to disease and starvation.

According to Yale University’s Cambodian Genocide Studies Program, approximately 1.7 million people lost their lives in the country between 1975-79, a staggering 21 percent of the country’s population, one of the worst human tragedies of all time.

To put that into comparative numbers, a tyrannical government in the U.S. would have to exterminate 67 million citizens, or roughly the entire enumerated population of the states of California and Texas with half of New York thrown in for good measure, to meet this butcher’s bill on the same scale.

Estimates by the United Nations, who stepped in years after a Vietnamese Army swept the Khmer Rouge from power, put the total at closer to 3 million people and millions more displaced. Since then, the Extraordinary Chambers in the Courts of Cambodia (ECCC) have tried leaders of the period for crimes against humanity and the country has tried to rebuild, though Human Rights Watch contends the current government’s security forces enjoy impunity for serious human rights abuses, including extrajudicial killings and torture.

But the new post-Pol Pot leader is a good guy, yes? Well, current dictator Hun Sen, styled as “Lord Prime Minister, Supreme Military Commander,” has been in power since 1985 and cut his teeth as a battalion commander in the Khmer Rouge before he jumped ship to be the nation’s leader during Vietnamese occupation. Since then he has kept power through military coup and sketchy elections while protesters face very real bullets in the streets from the Army. Since he took the reigns, the U.S. has experienced five more or less Democratically-elected Presidents across two political parties and is looking for it’s sixth. Sen may not be a Pol Pot. Mussolini, maybe.

Cambodia was long the subject of strict gun control polices, dating back to the French, then to the Royal government in 1956 after the Europeans pulled out, and finally under Pol Pot (and Sen after 1998).

This has often been included in a string of “Gun Control Works” emails and memes by Second Amendment advocates that have circled the Internet for generations, and in postings by gun rights groups. Fact check organizations have attempted to debunk such assertions for just as long and have settled with the best argument that, “We have no doubt that Stalin, Hitler and Pol Pot tried to keep guns out of the hands of ordinary citizens. But that doesn’t mean that gun control necessarily leads to totalitarian dictatorships.”

Still, you cannot help but imagine that if there were significant arms in the hands of the average Cambodian facing genocide during the heady days of the Killing Fields, such a totalitarian dictatorship may have had to pump the brakes on filling trenches with bodies at such an astounding rate.

As Professor David Kopel pointed out in a commentary piece for the Washington Post‘s Volokh Conspiracy in a direct parallel, in many cases conquered and disarmed Jews during World War II recognized that the Nazis were exterminators and fought back.

“When they could obtain firearms, they fought effectively. They constituted half of the guerrilla resistance in Eastern Europe in 1943. They shut down the Sobibor and Treblinka extermination camps,” noted Kopel.

In France, noted Kopel in a separate piece on the Warsaw Ghetto Uprising, Jews amounted to less than one percent of French population, but comprised about 15 to 20 percent of the French Resistance.

The collection of the U.S. Holocaust Museum is filled with biographies of young Jews who escaped from Nazi confinement and, obtaining weapons, did not go quietly into the night escorted by black uniformed soldiers.

There is Sara Ginaite, a Lithuanian teen turned partisan who over a nine-month period repeatedly sneaked back and forth into the Kovno ghetto to lead more recruits out, pretending to be a nurse and claiming that she needed to escort sick workers to the ghetto hospital, bringing them to the forest instead. She carried a Mosin-Nagant rifle and captured German grenades and helped liberate Vilna.

Another is 16-year-old Claude Lowenstein, who was liberated by local partisans in France and manned a donated Bren gun dropped by the Allies into occupied Europe, which he put to good use against German convoys.

The list goes on. Sure, one could argue that Lowenstein and Ginaite are anecdotal accounts, but both survived the war with a gun in their hand and lived to a ripe old age to tell the tale.

Therefore, you would think that Cambodians learned a powerful lesson about firearm ownership after Pol Pot and the subsequent Vietnamese occupation. In fact, following said occupation there were plenty of Chinese-made AK47s and RPGs in circulation by the 1990s as a by-product of the implosion of the many factions fighting during that era. The going rate around the time the new and improved government banned all guns (not kidding) in 1998 for an AK was about $40. A Slate reporter noted that in 2004 it had climbed closer to $100 and the Phnom Pen Post held that even in 2015 — some 17 years after the complete prohibition on private gun ownership in Cambodia, the “wealthy and connected still have little trouble bringing their pistols and assault rifles with them for an evening out.”

Gun tourism in Cambodia is actually a booming business for Army-associated ranges (ranked 1 of 17 Fun & Games in Phnom Penh by Trip Advisor!) where the jetsam and flotsam of the Vietnam conflicts can be shot for a small fee. You can even rent a pre-owned Rambo wig and fake muscle pullover shirt for your pics with a former GI M60, fire any number of moldy looking RPGs or even shoot a cow with one for a the right amount of dough. The Killing Fields are now the grazing fields.

According to the Australian-based Gun Policy.org, there are as many as 600,000 illegal guns in the country, which had 964 homicides by all causes in 2012 against a population of 14.8 million. For comparison, according to the Congressional Research Service, there are some 300 million guns in the U.S., a country which suffered 12,765 homicides by all causes in 2012 (about a two-thirds by guns) against a population of 314 million. If you do the math, although there are about 20-times more guns per person in the U.S. than in Cambodia, the per capita murder rate (1 per 24,598) was a little over half that of the Southeast Asian country (1 per 14,626).

In terms of safety, the U.S. State Department has regularly warned Americans traveling to Cambodia to be alert, citing the embassy has received reports of “random gunfire and armed attacks in the vicinity of bars, nightclubs, and other entertainment venues” and that U.S. citizens should avoid the provinces of Preah Vihear, Oddar Meanchey, and the Banteay Ampil district of Banteay Meanchey province because of unexploded ordnance and border conflict.  Canada and the UK have similar warnings.

All this poses the question, who should lecture whom about gun control? After all, it works, right?