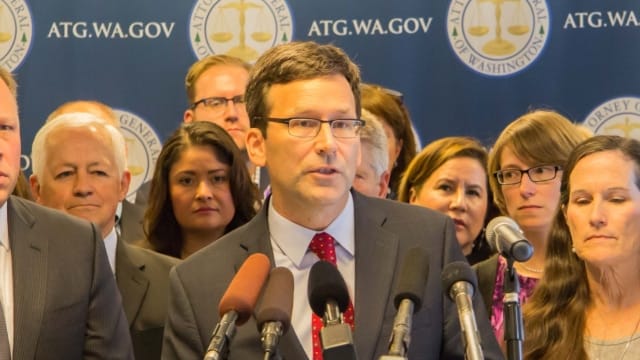 Citing a 310-person survey conducted by gun control groups as a mandate, Washington Attorney General Bob Ferguson debuted his plan for a ban on “assault weapons and high-capacity magazines.”

Ferguson, a Democrat who was elected in 2012 with 53 percent of the vote, announced Wednesday he would submit agency request legislation to state lawmakers seeking to lower the boom on guns such as the AR-15 and detachable magazines capable of holding more than 10 rounds.

“I have a duty to protect the public, as well as uphold the constitution,” said Ferguson in a statement released through his office. “My proposal will ban some of the deadliest weapons, while respecting the Second Amendment right to bear arms.”

While draft legislation was not made available, Ferguson related he wants a two-fold measure: A ban on semiautomatic weapons with “military-style features” and a limit on magazine capacity to a maximum of 10 rounds of ammo. As such it would mirror in some ways California’s long-standing assault weapon ban enacted in 1989 and enhanced several times over the years.

Ferguson’s office contends the move will save lives and cited a recent poll presented by Washington Ceasefire and Ceasefire Oregon that “showed that 65 percent of adults in the two states — including a great many gun owners — favor an assault weapons ban and want lawmakers to act.”

The survey mentioned was announced in July by the groups in a joint effort to erect a “West Coast Wall” by joining with California to establish a ban on what they term “assault weapons” and ultimately magazines capable of holding more than five rounds.

The groups cite research by Everytown claiming that in mass shootings where “military assault weapons” are used, the casualty count is higher, as well as a SurveyMonkey poll of 310 people in the two states that found 63 percent of respondents were in favor of a ban.

Ferguson did not release crime data to support his effort. A look at FBI statistics for Washington show the state had 172 homicides in 2014, the most recent year that statistics are available, and of those six were committed with rifles — numbers that are some of the lowest in the nation.

The Attorney General did note a recent shooting at a house party in Mukilteo involving a recently purchased Ruger AR-556 that left three dead. “The recent tragedy in Mukilteo drives home the need to act with urgency to end the availability of weapons designed with only one purpose — to kill people,” he said.

The suspected killer in that incident, a 19-year-old man who says he was seeking retribution after a rejection by a woman, is facing the death penalty.

Gun rights advocates feel Ferguson’s efforts are off base. “Unfortunately Washington state has an attorney general that attacks constitutional rights instead of defending them,” Alan Gottlieb, chairman of the Citizens Committee for the Right to Keep and Bear Arms, told Guns.com. “He is bought and paid for by the gun prohibition lobby.”