College papers: No guns til 30, add semi-autos to NFA 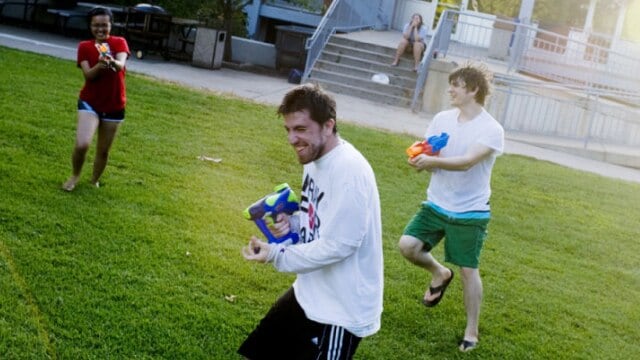 Columbia College students get soaked at water gun fight. Some student-run papers argue this should be about the limit of gun rights for undergrads (Photo: Columbia Tribune)

Student run newspapers at Notre Dame and Harvard University are stumping to regulate AR-15s under the National Firearms Act and restrict gun ownership to those over 29 years of age.

An unattributed piece from the editorial board of the Harvard Crimson, the daily paper of the school since 1873, rails against recent campus carry legislation. The argument put forward by the board is one of neurology, that students simply aren’t advanced enough to be trusted with firearms, pointing to scandals involving campus Greek life as an example of youth gone wild.

The frontal lobes, the area of the brain responsible for ultimate decision-making, may not even fully develop until the 30s, and one of the last areas to mature. While this lagged development should not exempt college students from all responsibilities, Texas ought to reconsider the prudence of relying on gun-toting 20-somethings for campus safety.

Next up, Stephen Raab, writing for The Observer, the student-run newspaper of Notre Dame & Saint Mary’s, starts off strong with an argument titled “Rage Against the Machine Gun” (coincidentally, Zack de la Rocha just dropped his first solo effort since leaving RATM in 2000) for requiring registration and federal tax stamps for many semi-auto rifles.

Raab errs in that he classifies bolt-action rifles (such as Mauser 98Ks, and Short Magazine Lee Enfields, used during World War II) as “battle rifles,” a term generally used to describe the class of intermediate .30 caliber rifles such as the FN FAL, Beretta BM59 and M14. Then, he lumps them in with semi-autos, citing they were extensively used in combat, when– with the exception of the M1 Carbine and Garand– most shoulder fired weapons used in martial service from 1939-45 that were not bolt-action were select-fire (Thompson M1, MP38/40, M2) or full-auto only (M3 Grease Gun, PPsh-40, et. al).

Acknowledging that civilian semi-auto assault rifle variants (“assault weapons”) are “used in less than two percent of all gun crime” Raab tosses out that they continue to get press and will do so, “In the absence of regulation.”

The regulation he argues for? Repealing the Hughes Amendment, thus making new production machine guns registered under the NFA available to civilians again (woot!), but only after adding your favorite Mini-14 and AR-15 to the same class.

A modernized assault weapons bill should be modeled after an excellent law already on the books — the National Firearms Act (NFA) of 1934. Passed in the wake of Prohibition-era gang violence, this law severely restricted private ownership of machine guns, explosives, silencers and short-barreled firearms. Though not banned outright, the purchase of such a weapon requires an extensive background check (including photographs and fingerprints), registration and a tax payment. A new bill would elevate assault weapons to this same level of regulation. Neither full-power battle rifles nor fixed-magazine rifles would be affected by this legislation, and the law would not be retroactive.

Raab, is an MSM Candidate at the Mendoza College of Business, and graduated Notre Dame with a Bachelor’s in Chemical Engineering in 2016.