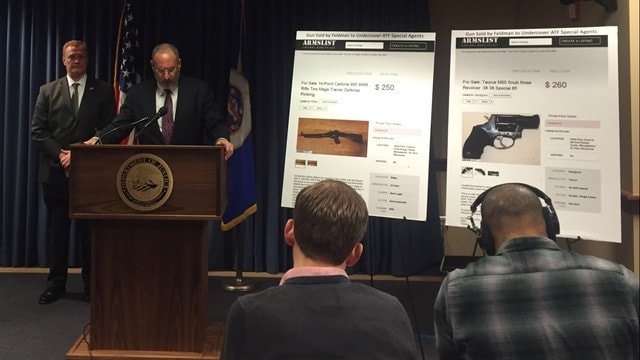 Federal prosecutors argued Feldman flipped 41 guns in a two year period, typically listing them for sale an average of nine days after he purchased them. (Photo: Brace Hemmelgarn/KARE11)

A Minnesota man who bought and sold guns for a profit without a Federal Firearms License was sentenced to 18 months in federal prison last week after a plea agreement.

Eitan Benjamin Feldman, 30, of Minneapolis, was arrested in February by federal agents investigating his gun buying and reselling habits.

During a two-year period, Feldman bought at least 41 firearms online via the auction site GunBroker.com, had them shipped to an FFL in Minnesota where he filled out Bureau of Alcohol, Tobacco, Firearms and Explosives paperwork, and then resold them on ArmsList.com for a profit. The average time between offering the gun for resale was nine days. The average profit made per gun was $90.

Feldman was taken into custody four months after ATF agents warned him about his activities and advised the Twin Cities man that some of the firearms he had sold had been recovered at crime scenes. Despite this, investigators contend that Feldman continued selling guns without a license.

A 10-count indictment included a charge of engaging in the business of firearms without a license and nine counts of making false statements during a firearm transaction. As each count carried a maximum penalty of five years in jail, the man was looking at up to a half-century behind bars.

Based on the Gun Control Act of 1968, current laws require persons who are “engaged in the business” of dealing in firearms be otherwise licensed. Generally, if an individual repetitively buys and sells firearms with the goal of turning a profit, they need a license while someone making occasional sales from a personal collection does not.

The ATF does not define how many guns one needs to sell to require a license but instead relies on a host of other factors that accompany the unlicensed sales such as advertising, selling and payment methods. For instance, presenting oneself as a licensed dealer on business cards and accepting credit cards could be a factor. However, the agency may issue a warning if these factors are present “when only one or two transactions took place.”

A month prior to Feldman’s arrest, the Obama administration announced a series of executive actions that included cracking down on those who sold guns without a license while the ATF issued guidance that there was effectively no change on their end. Nonetheless, gun control advocates celebrated the arrest of Feldman and others who were brought in by federal agents in an apparent crackdown.

Feldman entered into a plea agreement in April to the first count — that of operating without a Federal Firearms License — with the other nine counts dismissed.

In the government’s sentencing memo to the court, prosecutors asked for 18-24 months in prison, noting that “Despite being informed by ATF Agents that some of the firearms he had purchased and resold had been linked to crime scenes within days of his illicit transactions, the defendant continued his pattern and practice of willfully engaging in the business of dealing in firearms without a license. Most egregiously, even after ATF Agents served the defendant with a written warning notice and explained that his actions were almost certainly in violation of federal law, the defendant continued unabated and undeterred in his unlicensed and illegal dealing in firearms.”

Feldman’s attorney asked for six months in prison, citing the man had no criminal history, holds a bachelor’s degree, had a history of steady employment and, for most of the period that he bought and sold guns, thought he was in compliance with the law. That he simply flipped guns as a means to supplement his income and was ignorant of what it meant to be engaged in the business of selling firearms under federal law.

“He purchased firearms from a legitimate website, GunBroker.com, and completed the requisite ATF forms,” his attorney said. “From January 10, 2014, through July 13, 2015, Mr. Feldman purchased numerous firearms from the website which he then resold for a profit. He was informed via letter on October 2, 2015 that he could only buy and sell guns from his personal collection. Much of the alleged criminal activity took place before he received this letter.”

“Engaging in the business of unlicensed firearms sales is a serious crime that circumvents the critical background check routinely performed by legitimate licensed firearms dealers to prevent those persons who cannot legally possess firearms from acquiring them,” said Assistant U.S. Attorney Benjamin Bejar in a statement.

Feldman is set to surrender to the Bureau of Prisons on Oct. 3, and be incarcerated at FPC-Duluth.