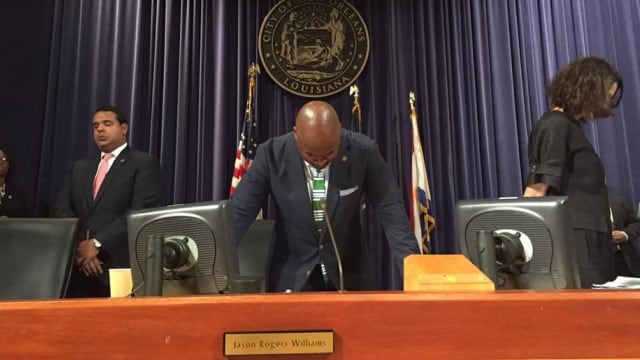 City leaders gave their unanimous support to a new ordinance mandating the reporting of lost or stolen guns and banning carry without a permit in some parts of the city.

Citing a “moral obligation to do everything in our power to fight back and halt the stream of guns getting in the wrong hands and increasing the penalties when they are used negligently,” the proposal was unveiled in April by New Orleans Mayor Mitch Landrieu, a member of Michael Bloomberg’s Mayors Against Illegal Guns. Under its guidelines, the Crescent City would see mandatory reporting of lost or stolen guns, deem city parks “gun free zones,” and punish “negligent carrying of a concealed firearm.”

The measure, passed by the Criminal Justice Committee in a 4-0 vote last week, was approved by the seven-member Council 6-0 Thursday with Councilman Jared Brossett not in attendance. Members argue the new regulations are needed to conquer illegal guns in the city.

“As a public servant I am not willing to simply sit back and rely on old methods to address our gun violence crisis,” said Councilman Jason Williams, a sponsor of the proposal. “This ordinance takes very reasonable measures and steps to keep guns away from young people and out of the hands of criminals. This ordinance will do nothing to limit a law-abiding citizen’s right to own a gun. It is singularly focused on gun safety and gun responsibility.”

The proposed ordinance would mandate that guns lost or stolen should be reported to the New Orleans Police Department within 48 hours. Failure to do so could lead to a $250 fine. City officials feel the law, which would be the first of its kind in Louisiana, would deter gun trafficking.

Next, the measure would make all of the 103 New Orleans Recreation Development Commission parks and facilities as well as areas where NORDC-sponsored events are taking place officially gun free zones under threat of a $500 fine or six months in jail. Exemptions are in place for law enforcement or those with a concealed carry permit. Open carry is legal in Louisiana without a permit, but would be barred from these recreational areas under the new law.

Some of the city’s most notorious shootings have occurred in city parks to include the Bunny Friendly Park incident on Desire Street that left 17 injured – including 10 minors – last November. Landrieu has called the shooting an act of “domestic terrorism” though many of those indicted, all between the ages of 17-29, are believed to have gang affiliations.

Finally, the proposal would adopt a city ordinance against “negligent carrying of a concealed firearm,” even with a permit. State law already has guidelines for those who are carrying an otherwise legal concealed weapon if a law enforcement officer suspects they are under the influence of either alcohol or drugs.

The National Rifle Association opposes the new legislation, holding the reporting mandate only punishes victims of gun theft while the imposition of more gun free zones in a city with a soaring crime rate strips legal guns from New Orleans’ streets.

According to Nola.com, there were 164 murders in the city last year, a jump from the previous two years, and so far this year, the historic city at the mouth of the Mississippi has seen 113 homicides with four months to go in 2016. Atlanta, Georgia, with roughly the same geography, population size and poverty level, saw 95 murders last year by comparison.

“Proposals such as this place unlawful restrictions on citizens’ right to possess a firearm for self-defense and simply disarm law-abiding gun owners while subjecting them to potential victimization,” reads an alert issued by the gun rights group Wednesday.

The ordinance heads to Landrieu, who is expected to sign it into law.