Pilot program aims to prevent suicides with the help of gun owners, industry 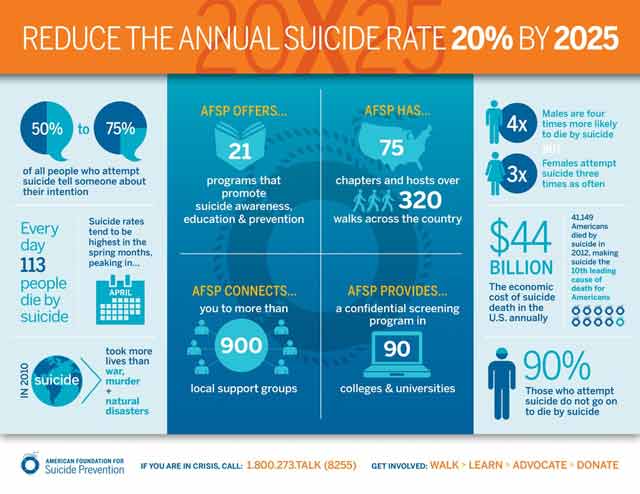 As Suicide Prevention Week comes to a close, one organization continues to move forward with a pilot program that partners with gun groups, shops and gun owners in an effort to reduce the suicide rate.

Project 2025, launched in October of last year, is an initiative of the American Foundation for Suicide Prevention, the country’s largest suicide prevention organization. The Project’s aim is simple: Reduce the gun-related suicide rate 20 percent by 2025.

According to the latest statistics, suicide is the tenth leading cause of death in America, claiming nearly 43,000 lives each year. In a staggering 49.9 percent of the suicides that occurred in 2014, the victim used a gun to take his or her own life, and of the roughly 33,000 gun-related deaths each year, suicide accounts for nearly two-thirds. Additionally, the overwhelming majority – 90 percent – of suicide attempts involving a gun are successful, meaning those who choose other methods are more likely to survive a suicide attempt and therefore have the opportunity to get the help they need.

Project 2025 hopes to significantly reduce those numbers by focusing on the most successful tool for suicide: Firearms.

“But, we know we can’t do it alone,” said AFSP CEO Robert Gebbia. “We will work alongside firearm retailers and range owners and the firearm-owning community to better inform and educate them on warning signs, and what to do if someone may be at risk for suicide.”

The National Shooting Sports Foundation announced a partnership with the AFSP last month, as Gebbia took note that the partnership is a critical part of the project, which will focus on education, policies, and intervention programs. The project will also attempt to reach varying demographic and sociological groups.

“Through Project 2025 analysis and the work of this partnership, we know that this public education has the potential to save thousands of lives,” Gebbia said.

Currently, Project 2025 has active programs in Alabama, Kentucky, Missouri, and New Mexico, but hopes to expand nationwide within two years.