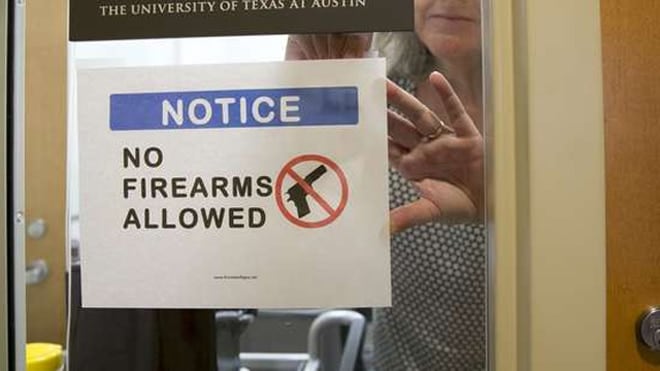 A UT professor posts a sign prohibiting guns at her office at the Student Activity Center on the first day of the new campus carry law last month. (Photo: The Statesman)

Two days after returning from summer recess, Minnesota Congressman Keith Ellison introduced a bill to require colleges to publicly disclose if they allow guns on campus.

Under the Campus Gun Policy Transparency Act, Ellison said schools will disclose their gun policies on their websites and in promotional materials as a means for prospective students “to make informed decisions about the safety of their college campuses.”

“We put safety ratings on our cars and warning labels on our medications, so it makes sense that we do the same for universities that allow guns on campus,” Ellison said in a statement. “Students have a right to know if their fellow students are bringing guns to class.”

Campus carry has been in the national spotlight for more than a year, but gained traction last month when Texas enacted its campus carry law.

Protestors, mostly students and educators, held a demonstration “Cocks Not Glocks” at the University of Texas’s Austin campus. The group juxtaposed the state’s permissiveness of guns on campus with its restrictive rules about free sexual expression.

Ellison’s bill, introduced on Sept. 8, has gained the support of six co-sponsors. The House returned from summer recess on Sept. 6, but shuts down again on Sept. 30 for fall break. Congress will return after the elections on Nov. 14.