Pipeline on hold after violence erupts amid protest 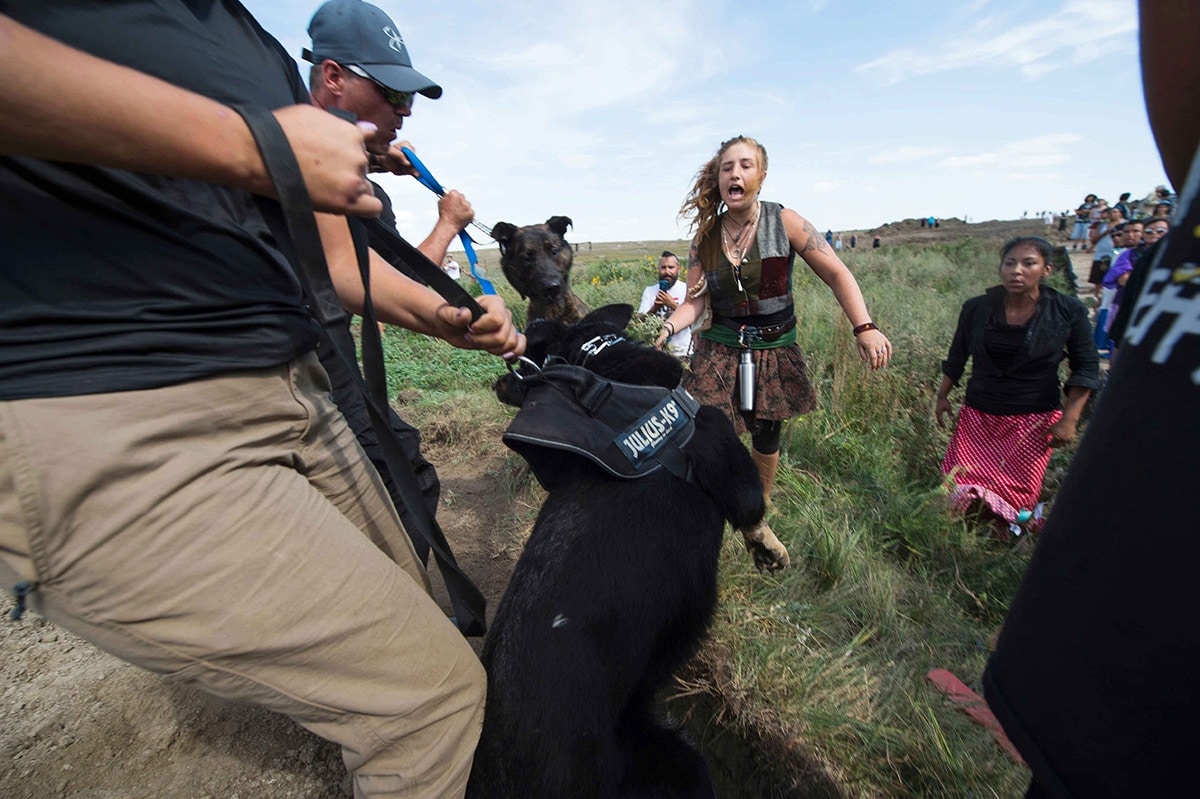 Dakota Access pipeline protestors were met with dogs and pepper spray after breaking through a fence in a construction zone last Saturday. (Photo: Robyn Beck/Getty Images)

Construction on the Dakota Access pipeline was halted after the federal government intervened over fears of mounting tension and violence from protestors.

The unusual decision by the Obama Administration to intervene came within minutes of a federal ruling by U.S. District Judge James E. Boasberg that found in favor of developers Energy Transfer Partners and allowed for the continuance of pipeline construction.

Standing Rock Sioux, the tribe at the center of the protests, vocalized concerns over the pipeline disturbing sacred burial grounds and cultural sites. However, a lawsuit by the group said the U.S. Army Corps of Engineers never consulted them about the matters.

“My nation’s history is at risk because the pipeline builders and the Army Corps failed to consult the tribe when planning the pipeline, and routed it through areas of cultural and historical significance, which will be destroyed,” said David Archambault II, chairman of the Standing Rock Sioux tribe, in a court filing.

In the ruling issued Friday, Boasberg acknowledged that “the United States’ relationship with the Indian tribes has been contentious and tragic” but that the Army Corps of Engineers “likely complied” and notified the tribe of its intentions.

“In recent days, we have seen thousands of demonstrators come together peacefully, with support from scores of sovereign tribal governments, to exercise their First Amendment rights and to voice heartfelt concerns about the environment and historic, sacred sites,” the statement says. “It is now incumbent on all of us to develop a path forward that serves the broadest public interest.”

Though the interdiction of the federal government proved to be good news, protestors remained leery of what the feds might do next.

“We can’t say what they want to do,” said Standing Rock Sioux tribe member Steve Sitting Bear to the LA Times.  “We can’t trust the intentions. We need to hear it for ourselves.”

Security guards and demonstrators butted heads in a violent protest on Sept. 5. Tribal leaders with Standing Rock Sioux said at least six people, including one child, were bitten by security dogs while 30 others were assaulted with pepper spray.

Vicki Granado, spokeswoman for Energy Transfer Partner, argued that protestors broke through a barrier and “attacked” workers. Four private security guards and two guard dogs were also injured in the skirmish, with at least one person taken to a nearby hospital for undisclosed injuries.

Authorities at the Morton County Sheriff’s office investigated the incident and appeared to support Granado’s account of the events.

“Individuals crossed onto private property and accosted private security officers with wooden posts and flag poles,” Sheriff Kyle Kirchmeier said in a Facebook statement. “Any suggestion that today’s event was a peaceful protest is false.”

For its part, the U.S. government addressed protesters in the joint statement reminding them that violence incurs penalties.

“Finally, we fully support the rights of all Americans to assemble and speak freely. We urge everyone involved in protest or pipeline activities to adhere to the principles of nonviolence,” the statement says. “Of course, anyone who commits violent or destructive acts may face criminal sanctions from federal, tribal, state, or local authorities.”

Tribal leaders urged supporters back in August to leave weapons, including firearms at home. So far, no shots have been fired in either direction across protest lines.