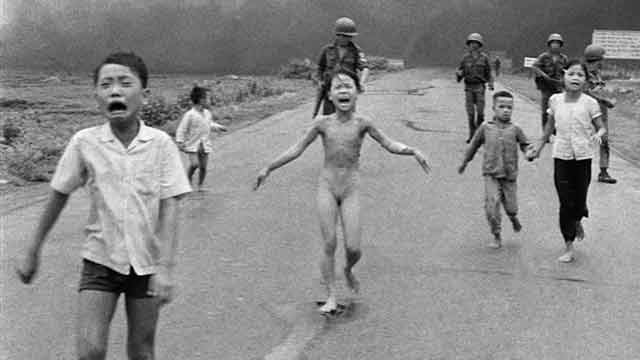 The 9-year-old girl ripped her burning clothes from her body after napalm was dropped on her village, but all Facebook could see was a violation of its policy on nudity. (Photo: Nick Ut)

Citing a violation of the website’s policy against publishing nude photos, Facebook has routinely been removing an iconic photo taken during the Vietnam War, but now, following serious backlash, the social media site has decided to allow the photo to be posted after all.

The photo at the center of the controversy was taken in 1972 by Nick Ut. The image, which later earned Ut a Pulitzer Prize, captured 9-year-old Kim Phuc and her siblings running away from their village after South Vietnamese forces accidentally dropped napalm on their own people.

Phuc, who later became known as the “napalm girl,” ripped her burning clothes from her body shortly before the photo was taken. The little girl was left with severe burns over more than one-third of her body and was not initially expected to survive. Although Phuc, who is now 53-years-old, defied the odds, she was left with extensive scarring, limited mobility and pain that has lasted a lifetime.

But censorship in any form, more notably that of the infamous war photo, is nothing new with the world’s largest social media network. In fact, the Guns.com Facebook page was temporarily shut down last year after posting an article about Phuc receiving treatment from a Miami-based dermatologist. The page was eventually put back up, but the iconic photo accompanying the article had to be replaced.

However, Facebook’s so-called censorship came to a head recently after Norwegian author Tom Egeland used the image in an article highlighting the most iconic war photographs of all time. The article, which was published in the Aftenposten, Norway’s largest newspaper, was promptly removed.

The newspaper’s editor, Espen Egil Hansen then called out Zuckerberg, who he named the “world’s most powerful editor.” Hansen accused Zuckerberg of abusing his power and failing to think the situation through thoroughly.

And the outrage continued to spread throughout Norway when Prime Minister Erna Solberg also posted the image to her own Facebook page, and while Facebook didn’t shut down Solberg’s page completely, they did remove her post with the photo.

Solberg later reposted the image with Phuc’s body blocked out, while noting, “What Facebook does by removing images of this kind, good as the intentions may be, is to edit our common history.”

After continued concern expressed from its community, the social media network, which has well over 1 billion users, took a look at the picture as it relates to its policies and decided, hours after Hansen’s letter was published, to allow the use of the image after all.

A statement from the social media giant read:

After hearing from our community, we looked again at how our Community Standards were applied in this case. An image of a naked child would normally be presumed to violate our Community Standards, and in some countries might even qualify as child pornography. In this case, we recognize the history and global importance of this image in documenting a particular moment in time. Because of its status as an iconic image of historical importance, the value of permitting sharing outweighs the value of protecting the community by removal, so we have decided to reinstate the image on Facebook where we are aware it has been removed. We will also adjust our review mechanisms to permit sharing of the image going forward. It will take some time to adjust these systems but the photo should be available for sharing in the coming days. We are always looking to improve our policies to make sure they both promote free expression and keep our community safe, and we will be engaging with publishers and other members of our global community on these important questions going forward.

Facebook noted that it could take several days for the change to go into effect for all users, but a quick search on the social media network did show the photo is once again being allowed on the website.

Phuc did not provide a comment on the incident, but Anne Bavin, Phuc’s personal manager, responded to the controversy.

“Kim is saddened by those who would focus on the nudity in the historic picture rather than the powerful message it conveys,” Bayin said in an email to CNN. “She fully supports the documentary image taken by Nick Ut as a moment of truth that captures the horror of war and its effects on innocent lives.”