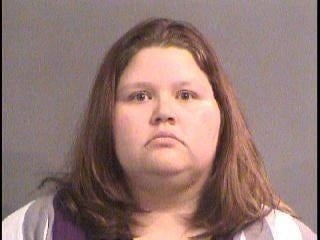 Sarah Hopkins admitted to a judge that she didn’t notify authorities she had transferred firearms to a convicted felon. (Photo: Sedgwick County Sheriff)

A Kansas woman pleaded guilty to federal gun charges last weeks after two firearms she bought were used in the shooting at a lawn equipment factory in Hesston, Kansas.

Sarah Jo Hopkins, 28, of Newtown admitted that she didn’t notify police that she had given a Zastavia Serbia AK-47 and a Glock 22 to convicted felon Cedric Ford.

On Feb. 25, Ford used the weapons to shoot 14 people inside Excel Industries, killing three. He was shot and killed by police at the factory.

In her plea agreement, Hopkins acknowledged that in early February 2015 she gave Ford the rifle and pistol after redeeming them from a local pawn shop. After the pair ended their relationship a few months later, Hopkins asked police to assist her in retrieving the firearms from the couple’s home.

During this time, Hopkins did not inform law enforcement of Ford’s felon status. Hopkins was able to retrieve the AK-47 and Glock pistol, but later returned the firearms to Ford after he threatened her.

Hopkins maintains she knew nothing of the shooting prior to its occurrence.

Despite the fact she was unaware of what Ford was planning,  families of the victims told local reporters Hopkins should still be held accountable for her actions that aided in the shooting.

“I personally think she should be charged with three murders,” Dominique Woods told The Wichita Eagle.” She’s responsible.”

Hopkins faces up to three years in prison, a $250,000 fine and one year of supervised release. As part of her plea agreement, prosecutors agreed to request a reduced prison term and will not object to Hopkins seeking probation.

Sentencing is set for Nov. 28.