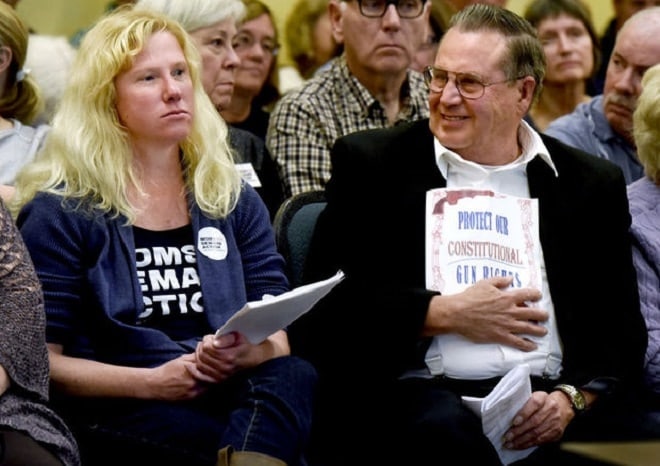 Those both for and against a controversial gun control measure filled the Missoula City Council chambers in October 2015. (Photo: Kurt Wilson/The Missoulian)

Missoula City Council will host another hearing Sept.26 on a controversial background check ordinance some believe could face legal challenges.

At a public hearing in October 2015, more than 300 residents packed council chambers to voice their opinions on the measure, which has the support of Missoula Mayor John Engen and high-profile gun control groups including Mom’s Demand Action.

The council’s Public Health and Safety Committee last week approved a second draft of the ordinance altering a jail penalty for first-time violators. The new lanugage imposes a $500 fine on first-time offenses, while additional violations carry the fine and up to six months of jail time.

The ordinance includes background check exemptions for hunting, emergency self defense and transfers between families and antique dealers.

Von Lossberg told The Missoulian last week despite the ordinance’s “minor changes,” hosting a second hearing “is the right thing to do.”

He also told the newspaper state law supports Missoula’s right, as a self-governing city, to enact ordinances regulating the sale of firearms. This, despite warning from Montana Attorney General Tim Fox to the contrary.

The National Rifle Association, among other gun rights groups, have argued the law does nothing to keep firearms out of the hands of criminals. The Montana Shooting Sports Foundation even promised a court battle over the ordinance, should it pass.

City Attorney Jim Nugent, as reported by local media, said the council faces possible legal action all the time and “should not be intimidated by threat of litigation.”