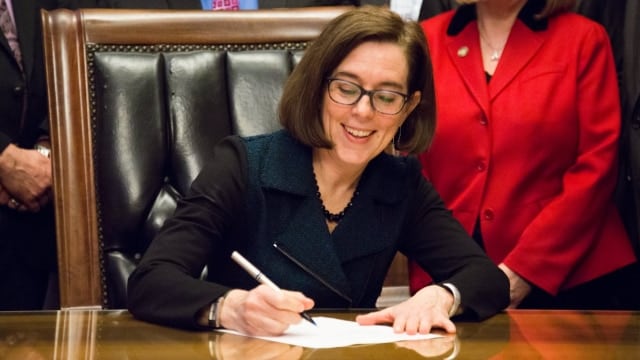 In support of her first run at election to her position, Oregon Gov. Kate Brown has received a big donation from an anti-gun billionaire philanthropist.

Brown, the former secretary of state, came to office without taking part in the traditional electoral process, succeeding Gov. John Kitzhaber upon his resignation following a corruption scandal last February. Since in the Governor’s seat, she has been a very strong supporter of gun control, embracing a controversial bill backed by Michael Bloomberg to expand background checks to virtually all gun transfers that she signed into law last year.

Now, just two months after directing the state police to track and analyze gun transactions, while urging Congress to ban assault weapons and enact no fly/no buy legislation, Brown has picked up a $250,000 donation from Bloomberg.

The donation matches $250,000 given by the Bloomberg-backed Everytown for Gun Safety organization to Kitzhaber for his 2014 gubernatorial reelection, and a similar amount channeled to former Oregon House Majority Leader Val Hoyle earlier this year, who stepped down in the face of a recall election for a failed bid at secretary of state — Brown’s old office.

Brown is running against Republican candidate Dr. Bud Pierce who, as noted by The Register-Guard, has raised $2.6 million in his campaign against the current Governor’s $3.6 million in an effort to finish out the final two years of Kitzhaber’s term.

“Kate Brown is the candidate of special interests,” said Pierce in a statement emailed by his campaign to Guns.com. “After a 25-year career in politics, Governor Brown knows how to get money from interest groups in an attempt to maintain her grip on power.”