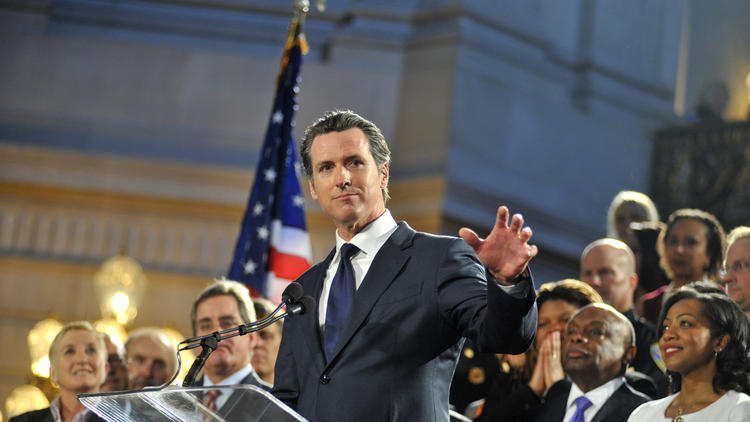 The survey of 959 registered voters conducted last month found 40 percent felt civilians with concealed weapons could make mass shootings more dangerous, compared with 33 percent who felt it would be “helpful” in a violent situation. Another 19 percent were undecided and 9 percent reported “neither,” the poll finds.

The institute administered the survey online and through the mail between Aug. 15 and Aug. 24 and supposes a 4 percent margin of error.

“You do see a significant number of Republicans who support Prop 63 and in general are supportive of common sense measures, but when it comes to this concealed carry law, it’s much more divided among party lines,” he said.

As Barker indicated, poll respondents expressed “overwhelming” support for Proposition 63, a ballot measure expanding background checks to ammunition purchases and limiting the sale of high-capacity magazines, with 93 percent of Democrats and 60 percent of Republicans favoring the measure.

California Lt. Gov. Gavin Newsom so far has raised nearly $4 million to get Prop 63 on the November ballot, despite the state Legislature’s passage of multiple gun control bills this year — in an “onslaught” some gun rights groups coined “Gunmageddon” — rendering much of the measure redundant.

Newsom’s referendum, dubbed the “Safety for All Act” by the gun control groups who support it, also forces mandatory reporting of lost and stolen guns and relies on “prohibited persons” to turn over any illegally-possessed weapons.

“Criminalizing failure to report the theft of guns is senseless. As Governor Brown noted when he vetoed a 2013 bill that would have done so, responsible gun owners will already report the theft of a firearm and irresponsible gun owners will not,” said Michele Hanisee, president of the Association of Deputy District Attorneys, in a March 2016 letter addressed the Newsom Ballot Measure Committee. “It is bad public policy to criminalize the conduct of ordinary citizens while, at the same time, incentivizing criminals to commit more crimes.”

Hanisee and other law enforcement organizations oppose the measure because they believe it encourages “residential burglaries and armed robberies of gun stores,” while imposing more burdens on “responsible gun owners.”

Peggy McCrum, president of the 28 California chapters of the Brady Campaign to Prevent Gun Violence, says voting yes on Prop 63 is a “no-brainer for any Californian who wants to keep guns out of the hands of violent felons and domestic abusers.”

“Plain and simple, the policies contained in Prop. 63 are going to save lives,” she said. “Keeping guns away from dangerous people is something we all can, and should, get behind. That’s why Brady is all-in to help ensure victory at the ballot box in November. The California Chapters of the Brady Campaign have seen historic success this year, helping usher in seven new gun reform laws. And we are committed to see this important initiative through as well. Californians are ready for this.”