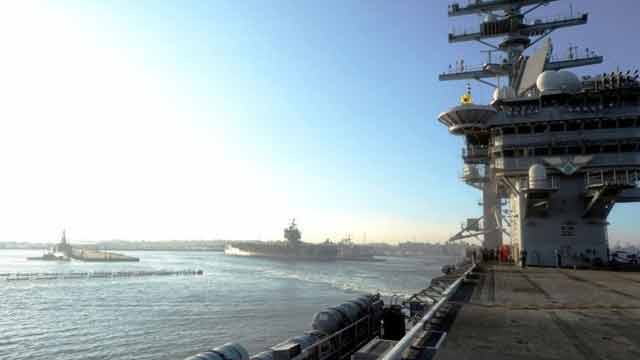 The crew members of the USS Dwight D. Eisenhower had an unexpected arrival over the weekend while in the Persian Gulf – a baby, born right aboard the ship, in the midst of a war with ISIS.

Apparently the third class petty officer from Carrier Air Wing 3 was unaware she was pregnant, but nine hours after checking into the carrier’s medical clinic with stomach pains, she gave birth to a healthy, 7-pound baby girl.

The 5th Fleet spokesman Cmdr. Bill Urban said both mom and baby are doing fine, and were airlifted via helicopter to Bahrain, then escorted to a local hospital.

Female service members are not normally allowed at an operational command, much less be deployed, past 20 weeks gestation.

“As the baby was born at sea aboard an operational unit, the main focus for the U.S. Navy, the ship and its crew is the safety and well-being of the baby and the mother,” Urban added, ensuring that medical personnel and other members aboard the aircraft carrier were skilled in both child birth and baby care.