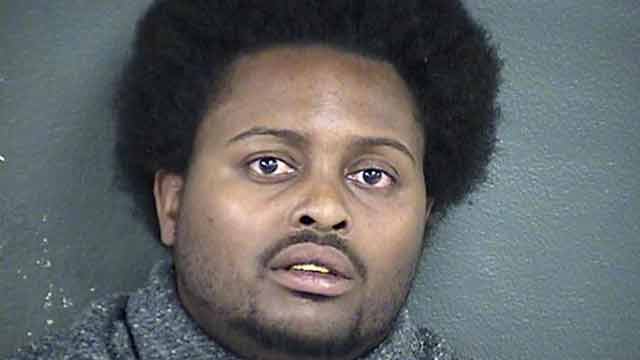 John W. Simmons III had prior drug charges and an order of protection filed against him. (Photo: Johnson County Jail)

One man is dead, another shot and a mother and her child are safe after two Good Samaritans came to her aid during an attack at a Wal-Mart parking lot Sunday afternoon in Shawnee, Kansas.

Authorities say two men attacked the 39-year-old woman as she put her infant in a baby seat inside her car and gunfire erupted when two passersby confronted the attackers, The Kansas City Star reported.

The attack unfolded around 1:30 p.m. when the two suspects, at least one of whom was armed, approached her and hit her on the head. Hearing frantic screams, a 33-year-old man confronted the attackers, but struggled to stop them and was shot multiple times. At that point, a second man, who also had a gun, intervened and shot one of the suspects. The other suspect fled the scene.

The attack left the woman with head injuries and the first good Samaritan with gunshot wounds to the face and chest. The woman has already been released from the hospital and is expected to be okay. Her baby was uninjured. Police interviewed and released the second good Samaritan, a 36-year-old man from De Soto.

The suspect died as a result of his injuries. He was identified as John W. Simmons III, 28, of Kansas City.  According to local media, Simmons had a protective order against him by a woman whom he shared a child. He was also the subject of a federal indictment for drug crimes.

The second suspect remains at large. Police said the woman was not acquainted with either of her attackers.

The first good Samaritan remains in the hospital, but is also expected to recover. He was not publicly identified, but his parents told a local Fox affiliate that they weren’t surprised to hear he tried to stop the attack.

“My son is just a wonderful guy,” his mother said. “He’d help anybody because that’s just his nature.”

She said her son joined the Air Force after 9/11 and was deployed to both Iraq and Afghanistan, but now works in landscaping.

“He would’ve helped anybody,” his mother said.

The woman said despite her son’s extensive injuries, he was more concerned about the condition of the woman and especially her baby, rather than his own condition.