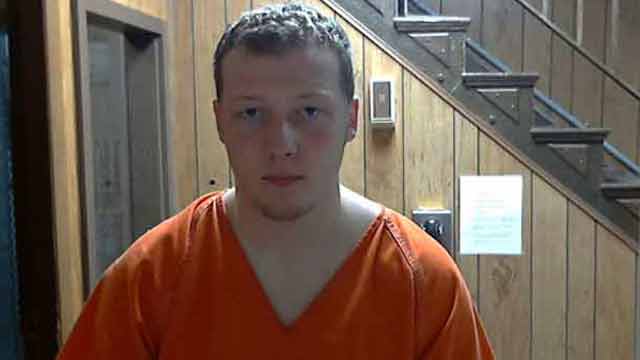 A 19-year-old student who was arrested in February for bringing a gun to his high school in Tarkio, Missouri, pleaded guilty in a federal court to machine gun possession, the Justice Department said Monday.

Federal authorities charged Michael Knoth with possessing an unregistered machine gun weeks after the Feb. 11 incident that resulted in a lockdown at Tarkio R-1 High School. After his initial arrest for the incident, investigators found two machine guns at his house during a search.

According to court documents, school staff reported to authorities that Knoth had been showing a loaded pistol magazine to other students, which they found when they confronted him. Staff members then put him in an In-School Suspension classroom until police arrived.

Knoth explained to teachers and officers that he had been participating in career day and dressed like a U.S. Marine, a branch that he wanted to join like his brother. However, authorities think he may have had another motive.

According to a transcript of a hearing in March that was obtained by Guns.com, responding officers asked Knoth if he had researched school shootings to which he said he had, and the school had an assembly planned for later that day.

“The — just the mere fact of the — the amount of ammunition, the body armor, just certain indicators that there may have possibly been another intent other than merely forgetting a pistol in a backpack,” said Larry Adams, an investigating officer involved in the case.

After his initial encounter with police, local and federal authorities searched his home where he had been living alone as his father worked out of state. Inside the home, they found two machine guns — an AR and an Uzi — and a kit to convert weapons into fully automatic. Neither firearm had a serial number, but authorities think Knoth had pieced the weapons together by ordering individual parts.

Superintendent of Schools at Tarkio R-1 School District, Patrick Martin, said he and other staff members are “100 percent against” Knoth being bonded or released from custody, according to the transcript.

“It’s the district and from the communication I’ve received from a vast majority of the community is that a school shooting was averted,” Martin said during his testimony. “In today’s society after a shooting, you always hear, well, if we would have just known this or just heard this or could have done that, it could have been avoided. It’s the district and town’s belief that we did avoid a very, very bad day.”

Knoth has been in federal custody since his arrest. He could face up to 10 years in federal prison without the possibility of parole, followed by three years of supervised release, as well as a fine of up to $250,000. A sentencing hearing has not been scheduled.