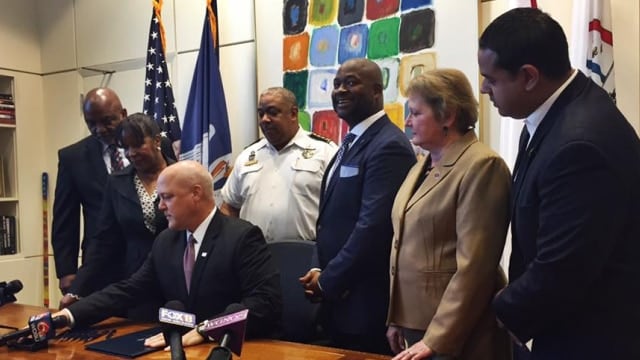 Under a law signed Monday by Mayor Mitch Landrieu, New Orleans is the first city in the state to require the reporting of lost or stolen guns. (Photo: Councilman Jason Williams)

New Orleans residents will now be obligated to report lost or stolen guns, see more gun free zones and be subject to fines for negligently carrying a concealed firearm.

The proposal was unveiled in April by city leaders eager to tame the Crescent City’s violent streets. Though trimmed from its initial scope, the ordinance passed the Criminal Justice Committee and City Council as a whole in unanimous votes earlier this month. New Orleans Mayor Mitch Landrieu, a member of Michael Bloomberg’s Mayors Against Illegal Guns, signed the measure into law on Monday.

“When criminals are intent on doing harm, too many innocent people are caught in the crossfire,” said Landrieu in a statement. “We have a moral obligation to do everything in our power to fight back and halt the stream of guns getting in the wrong hands and increasing the penalties when they are used negligently.”

Under the new law, guns lost or stolen have to be reported to the New Orleans Police Department within 48 hours. Failure to do so could lead to a $250 fine for the first offense, $500 for each subsequent. City officials feel the law — which would be the first of its kind in Louisiana and a rarity in Southern states — would deter gun trafficking.

“An M16 and an AK47 are not hunting rifles,” said Councilmember James A. Gray II, one of the measure’s sponsors. “A Glock 19 with a 33-bullet magazine was not made to shoot deer. These guns were made to kill people. If you’re going to own a gun, you have to be responsible and make sure that your lost or stolen gun isn’t used to hurt anyone.”

According to the Law Center to Prevent Gun Violence, 10 states and the District of Columbia mandate the reporting of lost or stolen guns. None of the states are in the South.

Next, the law defines all of the 103 New Orleans Recreation Development Commission parks and facilities as well as areas where NORDC-sponsored events are taking place as “firearm-free zones,” under threat of a $500 fine or six months in jail. Exemptions are in place for law enforcement or those with a concealed carry permit. Each NORDC facility will be marked by new signage as in coming weeks, the defacement of which carries the same fine as violating the ordinance itself.

Finally, the law criminalizes the “negligent carrying of a concealed firearm” under the same threat of a $500 fine or six months of imprisonment — as well as the possible loss of an individual’s carry permit and firearm. It should be noted the measure duplicates state law already in place.

The National Rifle Association opposed the new ordinance, holding the reporting mandate only punishes victims of gun theft while the imposition of more gun free zones in a city with a soaring crime rate strips legal guns from New Orleans’ streets.

The night before Landrieu signed the measure into law, a 63-year-old man was killed on his way to get a pack of cigarettes while five others were wounded in a shooting to which police are searching for motive.