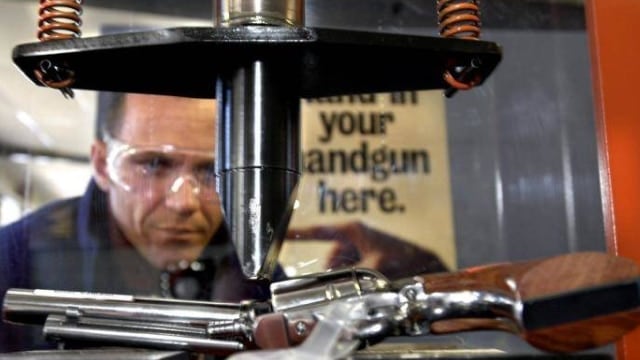 With shootings a weekly occurrence in Melbourne and crime up, Justice Minister Michael Keenan announced plans to allow those with illegal guns to turn them in without compensation.

The island continent with a population of around 24 million held a nationwide gun buyback in 1996 following a mass killing known as the Port Arthur massacre, where a gunman murdered 35 people and injured 24. The measure led to severe restrictions on firearms including an outright ban on most semi-automatic and pump-action rifles and shotguns. During the enactment of the law, the government bought back nearly 700,000 guns at a cost of $500 million, but whether or not it had a positive affect is still up for debate.

While conflicting studies have argued violent crime statistics have gone up while other hold they have dropped in the past 20 years, Melbourne– Australia’s second largest city– has seen 100 shootings since last January. In the past decade, firearms offenses have more than doubled from 2,308 to 4,947.

As an answer to help curb what authorities classify as the “grey market” in unregistered firearms in the country, an amnesty program will be launched in coming weeks to allow those with unwanted or unlicensed guns to turn them in for destruction without prosecution.

“Some of that will be somebody who might have grandpa’s old gun in the back shed that wasn’t registered that we want handed in,” said Justice Minister Michael Keenan as reported by the Sydney Morning Herald. “We want to make sure that people have the opportunity to hand these guns in without having any penalty.”

Last year authorities in New South Wales were shocked after being called in to pick up a 20-gun collection left behind by a deceased man that included an SKS and a 10/22.

Australian-based Gun Policy.org estimates the number of illegal guns in the country can range as high as 6 million while registered guns are less than half as many.

Contrary to popular reports, Australia has not been without mass casualty incidents with firearms since 1996. Last year a murder-suicide shooting spree in New South Wales left five dead, armed sieges of gunmen in Hectorville and Sydney in the past few years each left three dead and a 2002 shooting at Monash University left two dead and five injured.

Keenan told reporters he expected “thousands” of guns to be turned in.