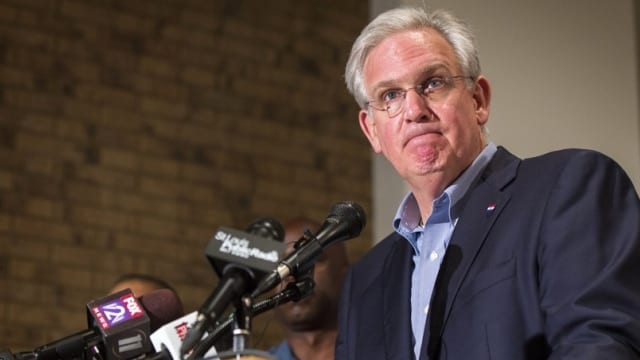 Gov. Jay Nixon’s record as the most overridden governor in Missouri history may grow this week should  lawmakers take action on his veto of a popular gun rights bill. (Photo: Lucas Jackson/Reuters)

State lawmakers are assembling in Jefferson City Wednesday for a brief veto session in which they may act to override Missouri Gov. Jay Nixon’s veto on a measure to grant concealed carry without a permit.

The proposal, SB 656, allows a person legally able to possess a firearm to carry it concealed anywhere that isn’t already prohibited by law and was approved in a 109-36 vote by the House in April before picking up an even larger 114-36 tally in May after the Senate’s 24-8 vote gave the measure a veto-proof margin.

In addition to loosening restrictions on the carry of firearms, the measure would have expanded Missouri’s castle doctrine and stand your ground protections.

Nonetheless, citing the bill would have eliminated the need for training, education, a background check and a permit in order to carry a concealed firearm in Missouri, Nixon scuttled the measure in June.

Presently, lawmakers have a chance to enact the proposal sans the Democratic Governor’s signature in a short session this week as Republicans hold a super majority in both chambers. An override requires a two-thirds majority in each chamber, which Republicans have in both the House and Senate without having to enlist support from across the aisle.

Republican Rep. Eric Burlison of Springfield intends to bring the measure to a vote in the House in the event of a likely override in the Senate.

“The bill that we’re passing doesn’t change anything with the status of someone who is a criminal or mentally incapable of carrying a firearm, like someone who has not passed a background check,” said Burlison this week. “They’re not able to purchase a firearm or carry one. We have not changed anything in that regard.”

The National Rifle Association and conservative commentators are calling on lawmakers to push through the override while gun control groups, police officials and urban mayors such as Kansas City’s Sly James oppose the move.

According to the Associated Press, outgoing term-limited Nixon is the most overridden governor in Missouri’s history with a staggering 83 vetoed bills and budgets reversed by the legislature — four times more than the combined total of every chief executive in the state going back to 1820 when it was still a territory.