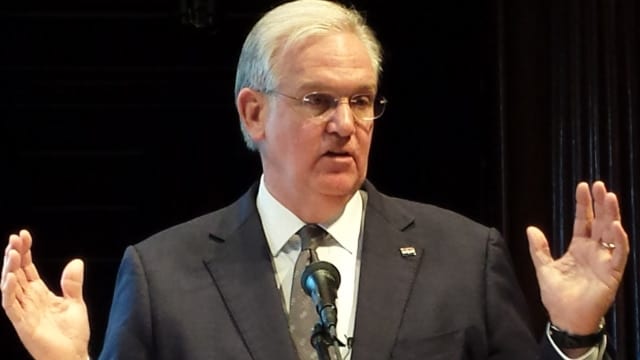 Outgoing Missouri Democrat Gov. Jay Nixon saw a host of bills he vetoed earlier this year shamble past the governor’s mansion into law under escort by the state’s GOP heavy legislature on Wednesday. (Photo: Missourinet)

The Show Me State will be the 11th in the U.S. to codify the right to carry a concealed handgun without a permit after the state legislature on Wednesday issued an easy override to Gov. Jay Nixon’s veto.

The proposal allows a person legally able to possess a firearm to carry it concealed anywhere that isn’t already prohibited by law. Both the House and Senate approved by veto-proof margins earlier this year, but that did not stop Nixon from dropping veto ink on the measure in June, setting the stage for an override this week.

Starting their session at noon, by the end of the night the Senate voted 24-6 to muscle the bill past Nixon to the House where legislators passed it 112-41 among largely party lines.

“It is just as essential a liberty today as it was 200 years ago,” said the bill’s handler in the House, Rep. Eric Burlison, R-Springfield.  “Those rights weren’t given to us by men, they were given to us by God.”

In all, the Republican dominated legislature overrode no less than five Nixon vetoes before adjourning around 10 p.m., cementing his legacy as the most overridden governor in the state’s history.

The sweeping gun rights expansion, SB 656, retains the state’s current permitting program, but maintains that law-abiding citizens who are legally able to own and carry a firearm for self-defense can do so without first obtaining such a license or complete training. Since 2014, Missouri sheriffs have issued five-year permits for a $100 fee after a background check and proof of eight-hours of safety training.

The new law will also lock in permit fees at current rates; implement 10-, 20- and 50-year options; and allow some training mandates to be fulfilled with online classes. Permit holders on military service will have extra time to renew their permits if they need it.

The package also expands Missouri’s Castle Doctrine and Stand Your Ground protections to use deadly force in specified situations. Some lawmakers had misgivings about the justifiable homicide and self-defense enhancements, arguing it could make a bad situation worse.

“You pulling a gun out puts you and your entire family in mortal danger, because now, you have escalated what otherwise be a robbery into a scenario where the trigger could be pulled,” said Sen. Jason Holsman, D-Kansas City.

Gun control groups, who held a rally at the Capitol on Wednesday in a last ditch effort to influence the session, condemned the actions by lawmakers to override Nixon’s veto.

“Missouri lawmakers buckled to the NRA instead of listening to the vast majority of Missouri voters, including mayors and law enforcement leaders, who support our current concealed carry permit system,” said Becky Morgan with Moms Demand Action in a statement. “And in doing so, they made our state the first new Stand Your Ground state since the death of Trayvon Martin.”

The National Rifle Association, who actively supported the measure during the legislative process and into the special session, held this week’s vote as a Second Amendment victory.

“This is a great day for freedom in Missouri. The legislature stood strong for the constitutional rights of law-abiding citizens by overriding Gov. Nixon’s misguided veto,” said Chris W. Cox, executive director of NRA’s Institute for Legislative Action in a statement. “Despite the best efforts of Michael Bloomberg and out-of-state gun control groups to defeat the override vote, their agenda was rejected.”

The bill’s provisions will take effect next year.