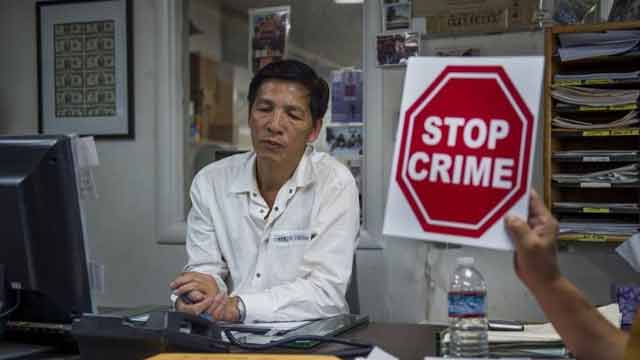 The Asian community in south Sacramento has long been targeted for certain crimes, but a recent influx in violent crime has caused some members of the community to become more vocal, with some even opting to pack heat and partake in neighborhood patrols.

The last six months have been tough on the city and its residents. In fact, crime has gotten so out of control that many Asian business owners are now shutting their doors earlier than ever, leaving them with an average profit loss of 20 to 30 percent. Residents say people don’t want to be out after dark anymore out of fear of being victimized.

“The people who live in south Sacramento aren’t coming out anymore,” Paula Young, manager of King Palace Seafood, told The Sacramento Bee. “They are afraid. All everyone talks about now is the crime.”

Likewise, restaurant owner Joe Liao said he doesn’t blame people for not wanting to get out anymore.

“If they go out to eat, they have two things to worry about – robbery in the parking lot or burglary at home,” Liao said.

Victims have been targeted for armed robberies and purse snatching, assaults, burglaries and home invasions, and the Sacramento Police Department is unsure whether some of these cases should be classified as hate crimes.

“There is a fine line between picking people who you think might have money and targeting someone because you dislike them,” said Sacramento Police Department spokesman Officer Matthew McPhail.

Stephanie Nguyen, executive director for Asian Resources Community Services, praised the Sacramento Police Department for its efforts, noting the Asian community has an excellent relationship with them.

“It makes me happy to hear that our community is finally pulling forward and making noise,” she said, adding, “Unless your voice is being heard, things are not going to change.”

And Nguyen isn’t alone in noticing the Asian community speaking up against acts of violence either.

“After so many years and far too many instances of violent crimes against Asians, the community really has no choice other than to speak out,” Yih-Chau Chang, press secretary for Responsible Citizens of California, told Guns.com. “Everyone has a breaking point and Asian Americans in Sacramento have reached theirs.”

RCC is a non-profit organization that promotes, educates and advocates for the right to carry in California, a right that an increasing number of Asian Americans are starting to exercise. In fact, Chinese community leaders in Sacramento have formed armed citizen patrols to combat crime. The patrol uses WeChat, an app that originated in China, to communicate needs for assistance.

“This is a lifeline for Chinese people,” said organizer Wei Xin Yang, who also noted the app is the only way some of the Chinese people will call for help.

“We need to take security into our own hands,” Yang added, “if not, who will protect us?”

“With these violent crimes happening in Sacramento, there is a general sense that the subject of lawful gun ownership has hit a turning point,” he said. “This shift in attitudes regarding the Second Amendment is long overdue for this segment of American society.”